NASHVILLE, Tenn. (AP) — Go ahead and forget Tennessee’s six-game skid, the franchise’s longest since Ken Whisenhunt lost his head coaching job seven games into his second season in 2015.
Only one game matters now for the Titans.

And yes, they can win the AFC South for a third straight year and keep their season alive with a home playoff game. All they have to do is go beat Jacksonville in the regular-season finale despite falling to 7-9 after a 27-13 loss Thursday night to the Dallas Cowboys. 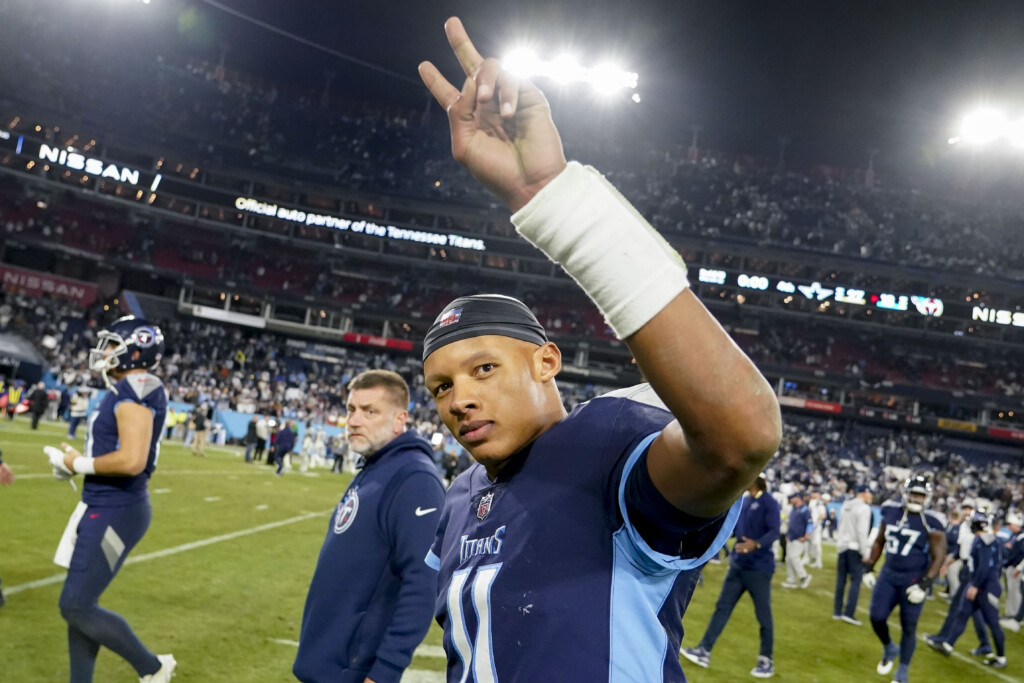 “We’ve seen it happen in this league numerous times throughout the year, throughout this season, last season,” Titans coach Mike Vrabel said Friday. “There’s only one game that matters, and that’s this one.”

With the Jaguars (7-8) having their own five-game skid earlier this season, the AFC South will be won by the eighth team to make the playoffs despite a losing streak of five or more games in a season. Both Chicago (six) and Washington (five) did it most recently (2020), and four of those teams wound up winning a playoff game.

The Titans treated the Dallas game essentially as an exhibition with nothing on the line, resting seven starters and having to put three other starters on injured reserve — led by quarterback Ryan Tannehill hours before kickoff.

They also gave Joshua Dobbs his first NFL start after signing the quarterback off Detroit’s practice squad Dec. 21. The six-year veteran should be the pick to start in Jacksonville, not that Vrabel is tipping his hand just yet.

“We’re excited that he’s here, and I thought he took advantage of his his opportunity,” Vrabel said of Dobbs. “And we’ll see where that leads.”

WHAT’S WORKING
Dobbs gave the Titans’ offense signs of life and a flicker of hope that rookie Malik Willis simply hadn’t provided. Dobbs ran some plays rolling out out of the pocket, the type of running not seen much from Willis. The quarterback who made his first NFL career start years after being drafted in 2017 also made faster decisions thank Willis and got the ball out quicker.
The former University of Tennessee star managed more yards passing by halftime than Willis had in any of his three starts, and finished with 232 yards.
Dobbs also didn’t have Derrick Henry on the field, who came into this week as the NFL’s second-leading rusher and sat out with a hip injury. Henry is expected back against the Jaguars; he ran for 121 yards and a touchdown but had two fumbles in the loss in Nashville.

WHAT NEEDS HELP
Penalties and self-inflicted wounds. With so many different players shuffling through, the Titans were flagged 10 times for a season-high 124 yards in penalties. Three of those came on defensive pass interference penalties for 74 yards. That doesn’t include at least four dropped passes on offense or missed blocks.

STOCK UP
Two-time All-Pro safety Kevin Byard. He posted the fourth multi-interception game of his career and now has a team-high four picks this season. That gives him his fifth season with at least four interceptions since 2017, most in the NFL in that span.

STOCK DOWN
LT Dennis Daley. He continues to struggle despite starting 14 games at left tackle for the Titans since three-time Pro Bowl Taylor Lewan tore his ACL in September. Daley’s low point may have come Thursday night when he false-started twice on fourth down with the Titans going for it.

INJURED
As much as the Titans worked to protect their banged-up roster, the injury list grew longer. Safety Andrew Adams hurt his right knee covering Cowboys tight end Dalton Schultz on his second touchdown catch. He immediately grabbed his knee and was carted straight to the locker room.

KEY NUMBER
86 — The number of players the Titans have used through 16 games with Dobbs among four making their debut against Dallas. The Titans have 22 currently on injured reserve with two on the list for a second time. That’s two off the 26 put on IR last season, when they set an NFL record by using 91 players in a non-strike season.

NEXT STEPS
Rest, hit the training room and wait potentially until Monday night to learn when the Titans play the Jaguars in Jacksonville. With this a winner takes the division and loser goes home game, teams usually shoved into a Thursday night slot to satisfy a prime-time game requirement could wind up as the final game of the NFL’s regular season on Jan. 8