NASHVILLE, Tenn. (AP) — A federal utility’s decision to resort to rolling blackouts after coal and natural gas units went offline during dangerously cold conditions has intensified questions about the Tennessee Valley Authority’s recent decision to double down on fossil fuels.

TVA experienced its highest ever winter peak-power demand on Dec. 23 as an arctic blast brought blinding blizzards, freezing rain and frigid cold from Maine to Seattle. The Tennessee Valley Authority said in an email that a combination of high winds and freezing temperatures caused its coal-burning Cumberland Fossil Plant to go offline at one point when critical instrumentation froze up. A second coal-burning plant, Bull Run, also went offline, TVA spokesman Scott Brooks said in an email, although he did not provide details. The utility “had issues at some of our natural gas units” as well, Brooks said. 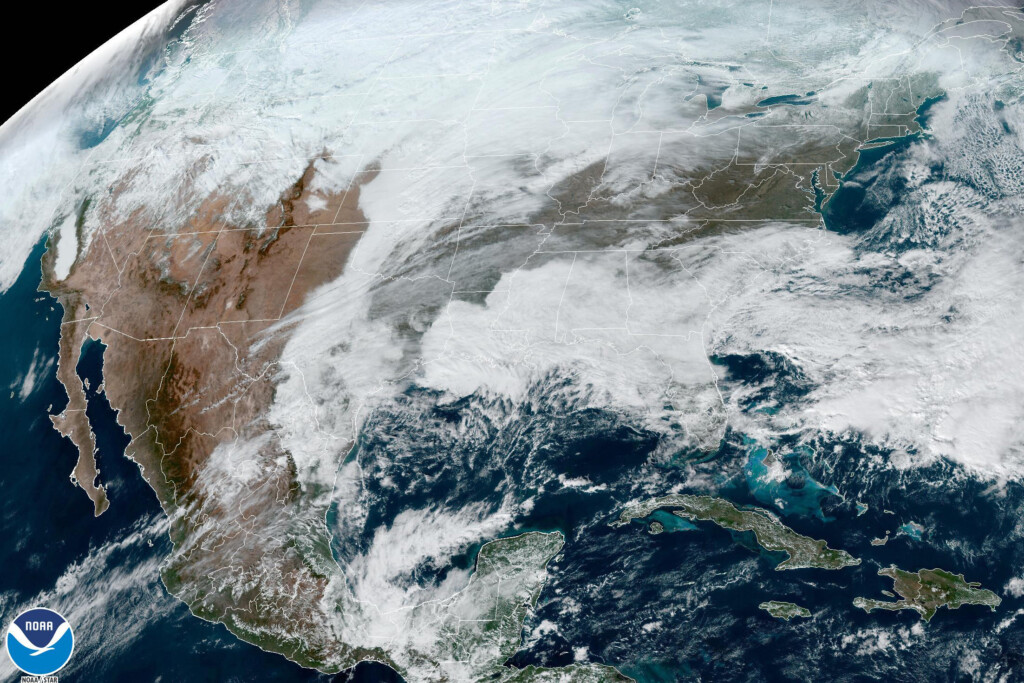 This satellite image made available by NOAA shows cloud cover over North America on Wednesday, Dec. 21, 2022 at 1:31 p.m. An arctic blast is bringing extreme cold, heavy snow and intense wind across much of the U.S. this week — just in time for the holidays. (NOAA via AP)

“The Tennessee Valley Authority’s coal and gas plants failed us over the holiday weekend. People across the Tennessee Valley were forced to deal with rolling blackouts, even as temperatures plunged into the single digits,” Southern Environmental Law Center Tennessee Office Director Amanda Garcia said in an email. “Despite this obvious failure, the federal utility is still planning to spend billions to build new gas plants and pipelines.”

TVA provides power to 10 million people in parts of seven Southern states. The federal utility issued a statement on Wednesday saying it takes full responsibility for the rolling blackouts on Dec. 23 and Dec. 24, just as many customers were preparing for Christmas.

“We are conducting a thorough review of what occurred and why. We are committed to sharing these lessons learned and – more importantly – the corrective actions we take in the weeks ahead to ensure we are prepared to manage significant events in the future,” the statement read.

The utility was already facing scrutiny for its recommendation to replace some aging coal-burning power plants with natural gas, instead of renewables and energy conservation measures — like solar, wind, heat pumps and LEDs. The decision to increase the use of natural gas was made just as TVA is about to seat six new board members nominated by President Joe Biden to fill out its nine-member board of directors. The utility’s recommendation to replace the Cumberland coal plant with a natural gas-fired one could become finalized by TVA’s CEO in the coming weeks.
Already, TVA is facing a lawsuit that claims it violated federal law by approving a gas-power plant that is under construction at the retired coal-burning Johnsonville Fossil Plant without properly assessing the environmental and climate impacts. TVA has declined to comment on the lawsuit filed this month.

Biden has set a goal of a carbon-pollution-free energy sector by 2035 that TVA has said it can’t achieve without technological breakthroughs in nuclear generation and energy storage. TVA has set a goal to reduce greenhouse gas emissions by 80% by 2035, compared with 2005 levels. CEO Jeff Lyash has said repeatedly that gas is needed because it can provide power at any time, regardless of whether the sun is shining or the wind is blowing.

“TVA’s CEO Lyash does not need to move forward with a massive new gas plant decision at Cumberland as early as January 9 before the new board is fully seated and when we just learned the mandatory blackouts were due to coal and gas failures,” Amy Kelly, with the Sierra Club’s Beyond Coal campaign, said in a statement.