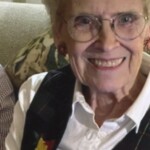 Mrs. Joy was born on December 27, 1935, to the late William Bryant Booth and Lottie Stanley Booth.  She was a member of the Cairo Church of Christ in Alamo, TN and was know as the “Candy Lady”.  She loved making candy and sour dough bread.  She also enjoyed playing Bridge.  She was also preceded in death by her first husband of over 28 years:  William J. Lee; and a half sister:  Marion Warren.

She is survived by her husband of over 33 years:  Dwayne Curtis of Jackson, TN; one son:  Larry Lee (Diane) of Memphis, TN;  three step daughters:  Lisa Smith (Larry Scott) of Friendship, TN, Sandra Curtis of Sarasota, FL, Sheri Escobar (Jose) of Midlothian, TX. She leaves a legacy of seven grandchildren and nine great-grandchildren.  She will be greatly missed by her Bridge partner:  Linda Kerr of Jackson, TN.