JACKSON, Tenn. — Human trafficking can present itself in many forms, and each crime means one more person becomes a victim. 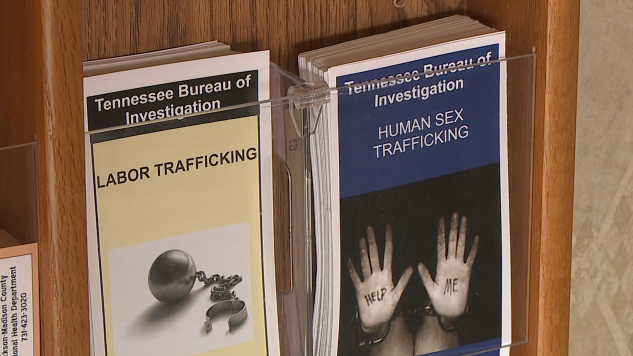 And with the month of January being Human Trafficking Awareness Month, Julanne Stone, with the Scarlet Rope Project, says the goal is to have the conversation.

“Bring the topic to light so people can be educated because we know when people are educated about something and understand it, then that will, hopefully, turn the numbers downward where it isn’t happening as much,” Stone said.

Stone says no one is immune to the crime, but says traffickers are master manipulators that seek out one thing.

“Traffickers find a vulnerability and they prey upon it. They give them what that person needs, whether they want drugs, they want to feel some type of acceptance, or they need $100 to buy their kids shoes. They will fill that void and they will flip it on that person,” Stone said. “With full confidence, we can say that all victims of sex trafficking have domestic violence, whether that is beating or rape. Those two go hand in hand. We have got to start talking about who it affects and what it is and it is the vulnerable people that walk among us.”

She says survivors of human trafficking have usually dealt with domestic violence.

And Jennifer McCraw, who works with domestic violence victims through the Safe Hope Center, says there are several cases in Madison County alone.

“Unfortunately, about half of the crimes against persons are domestic violence in Madison and Jackson,” McCraw said.

McCraw says often times, those victims that have been subjected to domestic abuse unknowingly repeat the cycle. And Stone says that opens them up to vulnerability.

“Oftentimes we see victims who are abused by multiple abusers. It becomes sort of a pattern in their life and we try to let them see that that is not how it has to be. When someone treats them in not a healthy way, they don’t even think that there is anything wrong with that,” McCraw said.

“People that are in those situations, 100% that is a vulnerability. That is going to put them in potential situations to be trafficked. We see a lot of that goes hand and hand with the survivors that we work with,” Stone said.

And McCraw says their biggest concern for any victim of domestic abuse is their safety.

“On average, it is seven times before a victim is killed or leaves permanently. So we just support them wherever they are and we do everything we can to keep them safe because our number one goal is victim safety and to show them that we are here to support them in however they move forward, even if they decide to stay with the abusers. We try to help them see a different life for themselves,” McCraw said.

The Tennessee Bureau of Investigation has additional stats regarding human sex trafficking in the state of Tennessee. You can read more about it here.