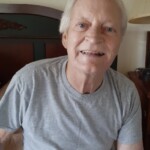 Ray was born September 14, 1952 in Somerville, the son of the late Aubrey Watkins and Ava Hazel Gammel Watkins. He was self-employed as a painter at Ray Eagle Painting Company for many years before becoming disabled. He accepted the Lord Jesus Christ as his Savior as a young child and was a member of Morris Chapel Baptist Church in Somerville. Ray never met a stranger and loved spending time with his grandchildren and great-grandchildren. His favorite television show to watch was Gunsmoke.

In addition to his parents, he was preceded in death by his sister, Lisa Joyner; two brothers, Joe Watkins and Kenneth Watkins; and the mother of his children, Brenda Hunsucker Nelson.