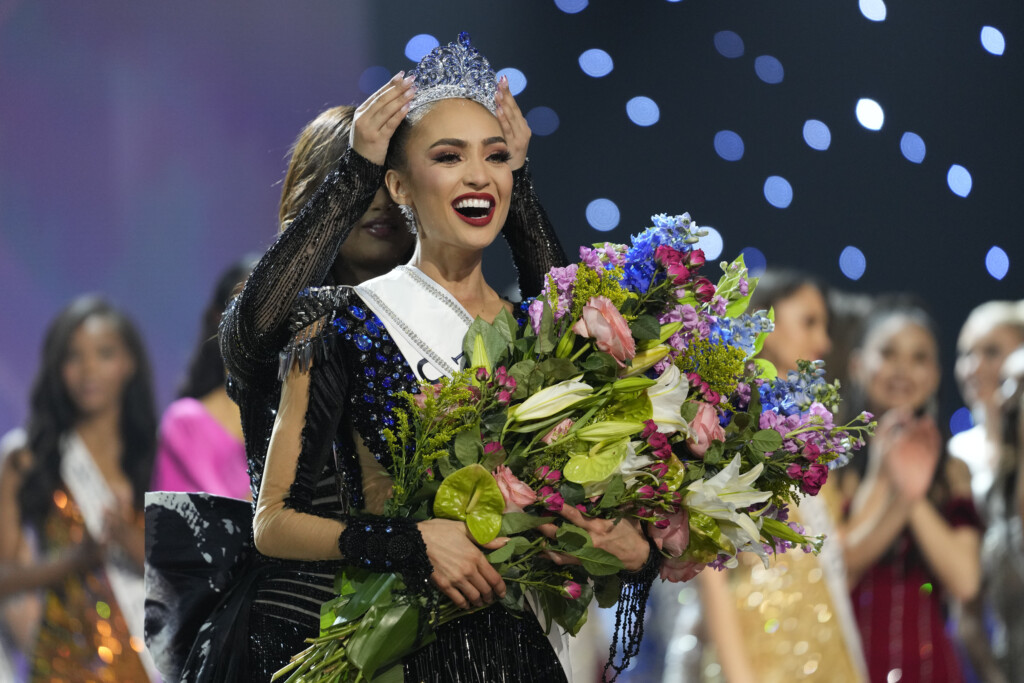 Miss USA R’Bonney Gabriel reacts as she is crowned Miss Universe during the final round of the 71st Miss Universe Beauty Pageant, in New Orleans on Saturday, Jan. 14, 2023. (AP Photo/Gerald Herbert)

Gabriel closed her eyes and clasped hands with runner-up Miss Venezuela, Amanda Dudamel, at the moment of the dramatic reveal of the winner, then beamed after her name was announced.
Thumping music rang out, and she was handed a bouquet of flowers, draped in the winner’s sash and crowned with a tiara onstage at the 71st Miss Universe Competition, held in New Orleans.
In the Q&A at the last stage of the competition for the three finalists, Gabriel was asked how she would work to demonstrate Miss Universe is “an empowering and progressive organization” if she were to win.

“I would use it to be a transformational leader,” she responded, citing her work using recycled materials in her fashion design and teaching sewing to survivors of human trafficking and domestic violence. “It is so important to invest in others, invest in our community and use your unique talent to make a difference.”

Rights to the pageant — once partly owned by former President Donald Trump — were bought last year by a Thai business tycoon and transgender activist for $20 million from IMG Worldwide LLC, a New York-based sports and talent marketing company.

Chakrapong “Anne” Chakrajutathib, who controls JKN Global Group Public Co. Ltd., is a reality show star in Thailand who is outspoken about being a transgender woman.

Chakrajutathib said when the purchase was announced in October that she wanted to “evolve the brand for the next generation.”

According to Miss Universe, Gabriel is a former high school volleyball player and graduate of the University of North Texas. A short bio posted on the organization’s website said she is also CEO of her own sustainable clothing line.

“We all have something special, and when we plant those seeds to other people in our life, we transform them and we use that as a vehicle for change,” Gabriel said.
Nearly 90 contestants from around the world took part in the competition, organizers said, involving “personal statements, in depth interviews and various categories including evening gown & swimwear.”