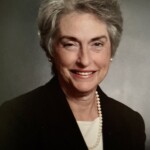 Barbara Ann Marbury Callery, age 82, passed away on Tuesday, January 17, 2023, at The Magnolia in Oxford, MS, where she resided for 2 years. Funeral services will be held on Monday, January 23, 2023, at 11 AM at the Lea & Simmons Funeral Home in Brownsville, TN with Bro. Grover Westover officiating. Burial to follow at Brownsville Memorial Gardens. Visitation will begin at 10 AM until the service hour.

Mrs. Callery was born March 9, 1940, to the late Robert L and Ellen Upton Marbury in Poinsette County Arkansas. She graduated from Baptist School of Nursing in Memphis, TN as a Registered Nurse. Her nursing career began at the Haywood County Memorial Hospital. She started her public health career at Haywood County Health Department in 1964 and worked her way up to Nurse Supervisor. She advanced and served as Communicable Disease Director for all of West TN. She won “Innovator of the Year Award” in 1993 for developing the first HIV Clinic in West TN. She retired from the state after 30 years of service. She worked post retirement at the local hospital and Jackson hospitals in employee health and later a case manager. Her retirement years were enjoyed by taking care of her 4 grandchildren, cooking, gardening, reading, and researching her family tree. She is remembered as a cheerful, loving, and caring person who was a devoted wife and nurse, adoring mother and grandmother, and loyal friend and co-worker.