WASHINGTON (AP) — A half century after Roe v. Wade, March for Life supporters are celebrating the dismantling of that constitutional right to abortion and heralding the political struggle set loose by the Supreme Court’s decision. Meantime President Joe Biden has pledged to do all in his power to restore that right. The first March for Life since the Supreme Court overturned Roe v. Wade in June came with a new focus. Instead of concentrating their attention on the court, the marchers vowed to push for action from the building directly across the street: the U.S. Capitol.

With the U.S. Capitol in the background, anti-abortion demonstrators march toward the U.S. Supreme Court during the March for Life, Friday, Jan. 20, 2023, in Washington. (AP Photo/Alex Brandon)

WASHINGTON (AP) — A half century after Roe v. Wade, March for Life supporters on Friday celebrated the Supreme Court’s dismantling of that constitutional right to abortion and heralded the political struggle set loose by the court’s decision. President Joe Biden pledged to do all in his limited power to restore core abortion rights. 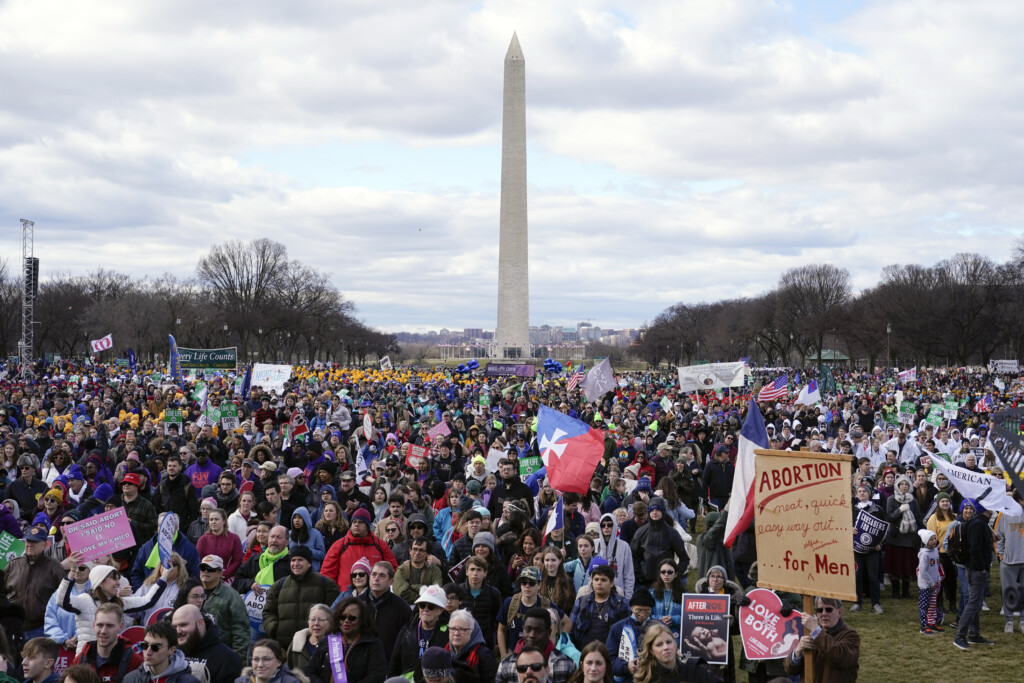 People participate in the March for Life rally in front of the Washington Monument, Friday, Jan. 20, 2023, in Washington. (AP Photo/Patrick Semansky)

The first March for Life since the Supreme Court overturned Roe v. Wade in June came with a new focus. Instead of concentrating their attention on the court, the marchers vowed to push for action from the building directly across the street: the U.S. Capitol.

Congress, movement leaders say, must be warned against making any attempt to curtail the multiple anti-abortion laws imposed last year in a dozen states.

Tens of thousands spread across a section of the National Mall for speeches, the Capitol Building in sight, then marched.

“For nearly 50 years, you have marched to proclaim the fundamental dignity of women, of their children and of life itself,” Mississippi Attorney General Lynn Fitch, whose office argued the case that overturned Roe v. Wade, told the crowd. “But this year is different.”

Indeed, with the constitutional victory behind them and lawmakers now the ones to be persuaded, marchers took a new route along the western face of the Capitol, to their usual destination between that complex and the court.

“I am the post-Roe generation,” read one sign. “Excommunicate Pro-Choice Catholics,” said another. Banners proclaimed “Love Them Both,” meaning mother and child.

Tammy Milligan came dressed as “patriot Wonder Woman” and stood out in the crowd. She said she never thought Roe v. Wade would be overruled in her lifetime, but the fight doesn’t stop there. “We want it to be unthinkable for a woman to have an abortion,” she said.

In a counter-protest outside the court building, 15 or so activists in favor of abortion rights held signs of their own: “Bans off our Bodies,” “Mind your own uterus.” They chanted, “Our bodies do not need advice from priests.”

They were easily outnumbered and surrounded by March for Lifers, but interactions were civil and police did not separate the two camps.

Biden offered his counterpoint in a proclamation recognizing Sunday — Jan. 22 — as the 50th anniversary of Roe v. Wade. “Never before has the Court taken away a right so fundamental to Americans,” his statement said. “In doing so, it put the health and lives of women across this Nation at risk.”

He said he would continue to use his executive authority in any way he can to preserve abortion protections while urging Congress to enshrine such rights in law.

The crowd appeared smaller than in past years but bore multiple hallmarks of previous marches in the enthusiasm of the gathering, the large numbers of young people from Catholic schools around the country and plenty of banners representing different churches and religious orders.

“The struggle has changed,” said Marion Landry, 68, who came from North Carolina with her husband, Arthur, 91, for the sixth time. “In some ways you don’t have that central focus anymore. Now it’s back to the states.”

Mike Miller, 59, who came from Boston, has attended at least 15 such marches over the years. “There’s still a lot of work to do,” he said. “This is only one step and in the next step, education becomes the biggest thing.”

From the stage, in a move to show that the anti-abortion movement crosses political parties and racial groups, Treneé McGee, a Black Democratic state representative from Connecticut, addressed the crowd.

“I stand in place of the pro-life Black women across the globe who are suffering in silence,” she said. The crowd roared.

House Speaker Kevin McCarthy offered support in a statement pledging that the new Republican majority will stand with abortion-rights opponents.

“While others raise their voices in rage and hatred, you march with prayers, goodwill, fellowship, compassion, and devotion in defense of the most defenseless in this country,” McCarthy said.

Jeanne Mancini, president of the March for Life Education and Defense Fund, said the march is “a somber reminder of the millions of lives lost to abortion in the past 50 years, but also a celebration of how far we have come and where we as a movement need to focus our effort as we enter this new era in our quest to protect life.”

Some movement leaders also hope to plant seeds in Congress for a potential federal abortion restriction down the line. Marjorie Dannenfelser, president of SBA Pro-Life America, said she envisions an eventual “federal minimum standard” cut-off line such as 13 weeks of pregnancy after which abortion would not be permitted in any state. Dannenfelser’s scenario would still leave individual states free to impose their own, stricter measures, including a total ban.

That last ambition is an admitted longshot since even if it passes the newly Republican-controlled House, it would most likely fail in the Democratic-held Senate.

“We know it’s not going to happen this session, but this is the beginning,” Dannenfelser said. “It’s (Congress’) responsibility to listen to the will of the people.”

In the absence of Roe v. Wade’s federal protections, abortion rights have become a state-by-state patchwork.

Elective abortions also are unavailable in Wisconsin, due to legal uncertainties faced by abortion clinics, and in North Dakota, where the lone clinic relocated to Minnesota.

Bans passed by lawmakers in Ohio, Indiana and Wyoming have been blocked by state courts while legal challenges are pending. And in South Carolina, the state Supreme Court on Jan. 5 struck down a ban on abortion after six weeks, ruling the restriction violates a state constitutional right to privacy.

Biden’s administration has limited options after the court decision. Vice President Kamala Harris is to give a speech in Florida on Sunday to emphasize on the 50th anniversary that abortion rights remain a focus for the administration.

“We’re going to see what else we can do,” said White House press secretary Karine Jean-Pierre. “But again, it’s going to take congressional action to truly deal with this issue.”

According to an Associated Press-NORC Center for Public Affairs Research poll conducted in July, 53% of U.S. adults said they disapproved of the Supreme Court’s repeal of Roe, while 30% approved. The same poll found that majorities think abortion should usually be illegal after the first trimester of pregnancy.

Anti-abortion activists also have their eye on the 2024 presidential elections and are essentially vetting prospective candidates over their views on the issue. Dannenfelser said she met recently with Florida Gov. Ron DeSantis, a potential leading Republican candidate, and came away “incredibly impressed,” but said it was still too early for her organization to endorse anyone.

She predicted that there will be some “fault lines” among Republican presidential contenders over abortion rights and protections, but warned that any candidate perceived as being soft on the issue will have “disqualified him or herself as a presidential candidate in our eyes, and having done so has very little chance of winning the nomination.”