Sunny skies with a frosty cold start will give way to temperatures around 50 in the afternoon with continued sunshine. Rain showers will return tonight into Sunday morning and another round of rain will show up in the afternoon on Sunday. A brief wintry mix is possible near Kentucky. We should get a break on Monday before another very complicated storm system moves through on during the middle of next week. We have a lot to cover in the forecast below. 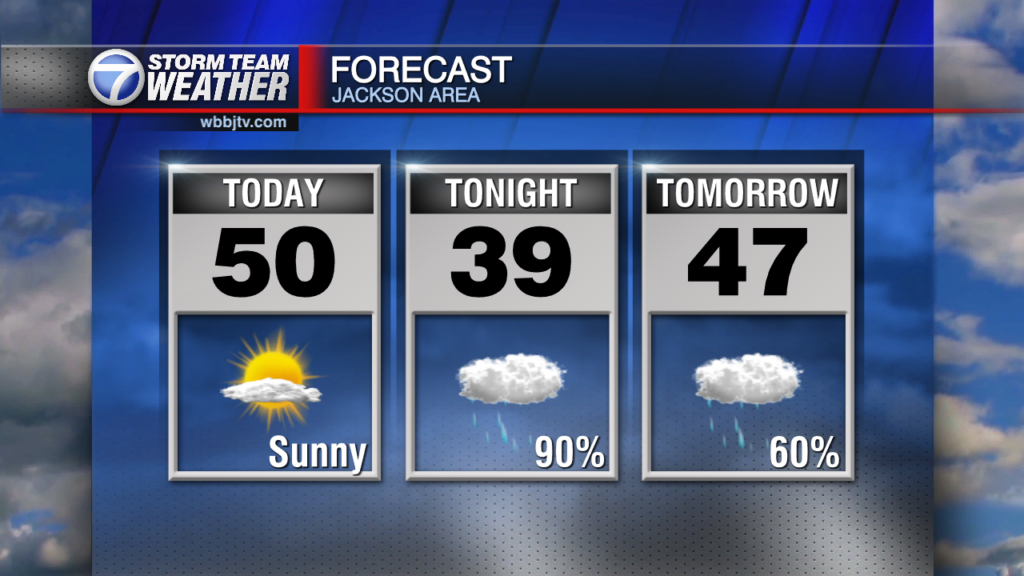 The weekend is going to start our cool and dry. Highs on Saturday will reach the low 50s and overnight lows will fall down to the upper 30s or low 40s. We should see plenty of sunshine early in the day but clouds will return in the evening and rain showers will try to return overnight into Sunday morning. We are expecting it to be too warm to produce any snow as of now, but a brief wintry mix will be possible for counties near the Kentucky border and the boot-heel of Missouri.

Here is a look at the set up this weekend, two different low pressures systems will impact the Mid South.

Highs on Sunday will reach the mid to upper 40s and the showers should clear out into the morning, but a brief second round of rain will return in the afternoon for some of us . Sunday night lows will again be chilly and fall down into the mid 30s. The winds look to come out of the east on Saturday and more out of the northwest on Sunday helping to keep the temperatures down a bit.

We should get a break from the rain on Monday but it is going to be quite chilly most of the day and week. Skies will be partly cloudy and the winds will come out of the northwest on Monday. Highs will reach the upper 40s and low 50s for the first half of next week. Lows will play a big factor on if we just get a cold rain or the possibility of some snow mixing in, especially into the day on Wednesday.

The system coming in Tuesday is very complicated and could bring several kinds of weather to West Tennessee. Rain will return for sure on Tuesday and last into the first half of the day on Wednesday, but if the temperature drops down near freezing Wednesday, it might not all be rain. We could even see a storm of two develop Wednesday morning as a warm front lifts through. As of now morning lows early next week are forecast to fall down between 33-40° each morning. We should drop down into the 20s though again by Thursday morning as it looks to be a pretty chilly finish to the week.

After the coldest Christmas in decades here in West Tennessee, warmer weather has returned for most of the start of the new year. This warm up will lead to more rain chances and the potential for some stronger storms as we kick off 2023. We had our first confirmed tornado on January 3rd near Brownsville. The next chance for  rain showers with return this weekend and maybe a few storms will return next Tuesday night, but that system could also bring some snow or a wintry mix with it Wednesday as well. You need to stay weather aware to changing weather patterns and monitor the forecasts closely. We got you covered in the WBBJ 7 Storm Team Weather Center as always.