Memphis on edge ahead of violent arrest video’s release

MEMPHIS, Tenn. (AP) — Memphis is on edge ahead of the possible release of video footage of a Black man’s violent arrest that has led to three separate law enforcement investigations and the firings of five police officers after he died in a hospital. Relatives of Tyre Nichols are scheduled to meet later Monday with city officials to view video footage of his Jan. 7 arrest. City officials said last week that video of the arrest would be released after an internal police investigation concluded and they met with Nichols’ family. But exact timing of the video release isn’t clear. Nichols, a 29-year-old father, FedEx worker and avid skateboarder, died Jan, 10. 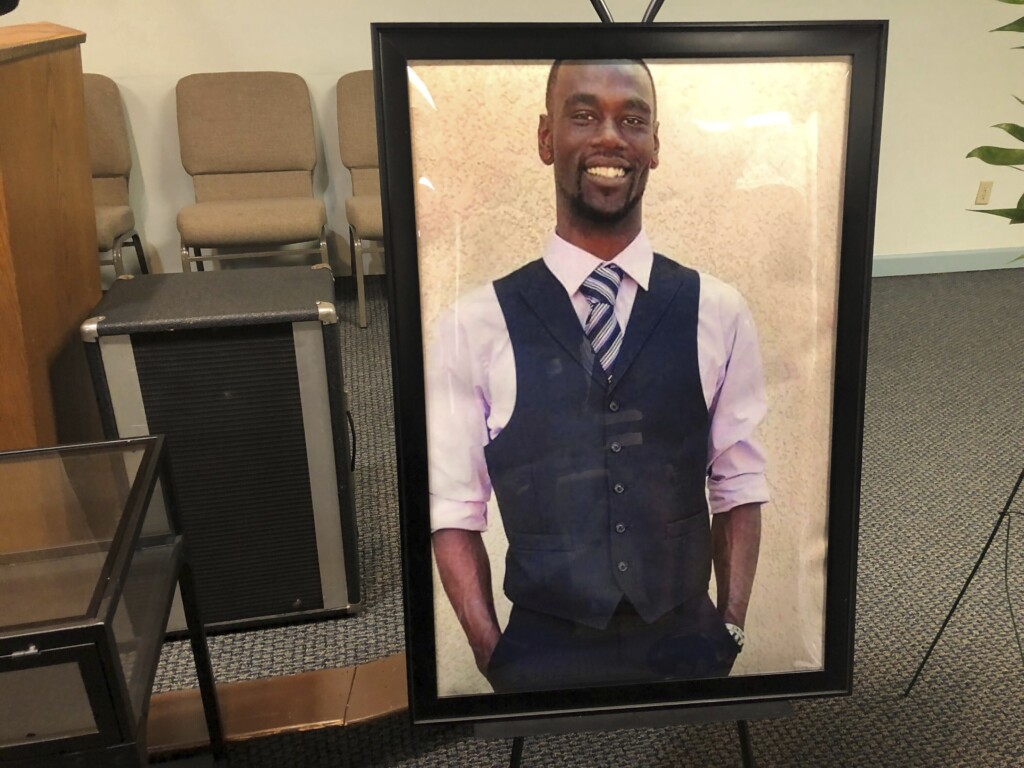 A portrait of Tyre Nichols is displayed at a memorial service for him on Tuesday, Jan. 17, 2023 in Memphis, Tenn. Nichols was killed during a traffic stop with Memphis Police on Jan. 7. (AP Photo/Adrian Sainz)

MEMPHIS, Tenn. (AP) — Memphis was on edge Monday ahead of the possible release of video footage of a Black man’s violent arrest that has led to three separate law enforcement investigations and the firings of five police officers after he died in a hospital.

Relatives of Tyre Nichols were scheduled to meet with city officials to view video footage of his Jan. 7 arrest, according to lawyers for the family. Mayor Jim Strickland and Memphis Police Department Director Cerelyn “CJ” Davis said last week that video of the arrest would be released after the conclusion of an internal police investigation and after Nichols’ family has seen it, but the exact timing wasn’t immediately clear.

His family, protesters and activists have called for the video’s release and for the officers to be charged with murder. Davis announced Friday that five officers involved in the arrest were fired after the police probe determined that they used excessive force or failed to intervene and render aid.

The officers have been identified as Tadarrius Bean, Demetrius Haley, Emmitt Martin III, Desmond Mills, Jr. and Justin Smith. All five are Black.

Relatives have accused police of beating Nichols and causing him to have a heart attack. Authorities have only said that Nichols experienced a medical emergency. The U.S. Justice Department has opened a civil rights investigation into the arrest, and the Tennessee Bureau of Investigation is looking into whether excessive force was used.

City and community leaders have expressed concern about the possibility of civil unrest following the video’s release.

“With the potential of civil unrest, we’re hoping that it won’t happen but we also have to prepare,” Shelby County Sheriff Floyd Bonner told WREG-TV.

State Rep. Antonio Parkinson, a Memphis Democrat, said the predominantly Black city has been on edge since the arrest, which he called “horrific and senseless.”

“The release of the tape may certainly aggravate the feelings of hurt, sorrow and embarrassment that we are all feeling,” Parkinson said. “However, the need for transparency is vitally important in all cases of police involved deaths.”

Van Turner, president of the Memphis chapter of the NAACP, also acknowledged that Memphis appears tense as it waits for the video. But he praised the city and the police department for taking “quick action” in firing the officers.

“We will continue to monitor and support a fair and just resolution to this matter,” Turner said. “We join the call for peaceful protests as we all work towards making sure that proper measures are put in place to prevent this type of incident from occurring in the future.”

Turner also said that the potential for unrest could be higher if the officers who were involved were white.

“If the video is significantly more egregious than what we have seen, then the unrest could still be there,” Turner said.

Nichols was arrested after officers stopped him for reckless driving, police said. In a news release the day after his arrest, the police department said that as officers approached the vehicle, “a confrontation occurred’ and he ran. It said officers caught up to him and that ”another confrontation occurred” while they were taking him into custody. Police said he complained of shortness of breath and was hospitalized.

Officials said a cause of death has not been determined.

Relatives have said the officers who pulled over Nichols were in an unmarked vehicle and that he experienced cardiac arrest and kidney failure from the officers beating him.

“This is the first step towards achieving justice for Tyre and his family. They must also be held accountable for robbing this man of his life and his son of a father,” they said.

The attorneys said they “will continue to demand transparency and accountability” and plan to review video footage to seek additional clarity about the circumstances that led to Nichols’ death. The lawyers planned a news conference for later Monday with the family.

As for the timing of the video’s release to the public, Shelby County District Attorney Steve Mulroy said the law “places limits on such video release, and that we have to make sure we do so without compromising our ability to arrive at justice in this case.”

“I ask for your patience as we gather all necessary information so that we don’t compromise the investigation or any possible future prosecution,” Mulroy said in a statement.

The Nichols case is the latest high-profile death case to rattle the city. Since November 2021, Memphis has seen the fatal shooting of rapper Young Dolph in a daytime ambush at a bakery; a crime rampage in which a man has been charged with fatally shooting three people and wounding three others; the killing of a United Methodist Church pastor during a carjacking in her driveway; and the early-morning kidnapping of a jogger whose body was later found near a house.