Top Prospects to Face Off Thursday at Pringles Park 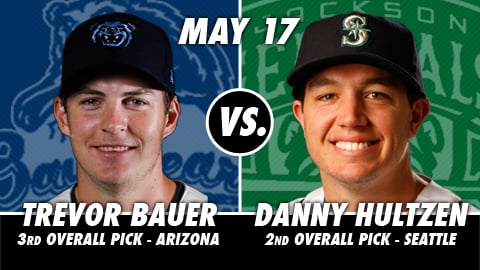 UPDATE: We have been told Trevor Bauer was called up to Triple-A Reno and will not be starting for the BayBears tonight. RHP Michael Bolsinger is expected to make the start for Mobile instead. JACKSON, TENN. – The Generals open a five-game series on Thursday night at Pringles Park against the Mobile BayBears, with first pitch at 7:05 p.m. Jackson fans will get to see one of the most highly anticipated pitching matchups in minor league baseball this season. Generals‘ lefty Danny Hultzen (3-3, 1.91), last year‘s No. 2 overall pick in the MLB draft by the Mariners will face off against Mobile‘s Trevor Bauer (7-1, 1.68), the No. 3 overall pick in last year‘s draft by the Diamondbacks. The Generals lead the Southern League North Division by a one space½ game over Huntsville and are 23-17 on the season. Mobile has the best record in the Southern League, 24-16 and lead the South Division by five games. Hultzen is rated by MLB.com as the Mariners top prospect and Bauer is rated also by MLB.com as the Diamondbacks top prospect. “It’s rare to have a match-up of two of the best pitching prospects in the game facing each other, although with Jackson’s rotation this year it was bound to happen at some point,” said Baseball America writer Ben Badler. “Bauer should be in the mix for a major league strikeout crown one day. Hultzen’s a bit of a different animal, but these are two of the best pitching prospects in baseball and both of them should be on the fast track to the big leagues.” Bauer, out of UCLA, ranks first in the Southern League in ERA (1.68), first in wins (7), first in strikeouts (60) and second in innings pitched (48.1). Hultzen, out of Virginia, ranks first in the league in opponents batting average (.134), third in ERA (1.91) and fifth in WHIP (1.06). Bauer received a $3.4 million signing bonus and signed a major league contract worth $4.5 million. Bauer won the Golden Spikes Award which is Collegiate Baseball’s National Player of the Year and was the Pac-10 Conference Pitcher of the Year in 2011. Bauer went 13-2 with a 1.25 ERA and a NCAA-best 203 strikeouts in 16 starts for the UCLA Bruins. Hultzen received a five-year major league deal that guaranteed him $8.5 million and a $6.35 million signing bonus. Hultzen was a unanimous First-Team All-American at Virginia in 2011 and a Capital One First Team Academic All-American (carries 3.37 GPA; history major). Hultzen was a first-team All-ACC honoree and ACC Pitcher of the Year (second straight Pitcher of Year award). Hultzen was a finalist for the 2011 Golden Spikes Award, Dick Howser Trophy and John Olerud Two-Way Player Award. He ranked fifth nationally in ERA (1.37) and led the ACC in strikeouts (165), which was second nationally. Hultzen also batted .320 during the 2011 season at Virginia. Tickets for Generals home games can be purchased at the Generals Box Office at Pringles Park, online at www.jacksongeneralsbaseball.com or by calling 731.988.5299.