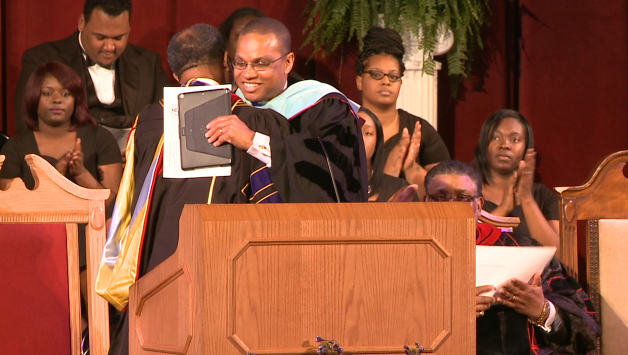 JACKSON, Tenn. — Lane college officially welcomed their newest president, Dr. Logan Hampton, during an inauguration ceremony with prayer, gospel, and words on working toward a brighter future for the college. In front of hundreds, the former reverend and Vice Provost for Student Affairs at the University of Arkansas was officially welcomed as the president of Lane College in Jackson. Dr. Hampton said he’s looking forward to combining his love of education with his love of the church, but being the center of attention made him a little uncomfortable. “A president really is just another employee that’s tasked with the responsibility of leading all of it,” Dr. Hampton said. He said he’s leading the college through new beginnings over the next few months. Changes include re-establishing the teacher education program, creating a freshman academy, and encouraging scholarship among the African-American males that make up the majority of the student body. “I’m amazed. I’m hoping to see a new start in Lane College,” said sophomore student Terry Smith. Dr. Hampton said he’s hoping that start will lead to realizing the college’s full potential. “This is my honor to lead them. It is my honor to work with them and I look forward to a great and bright future,” said Dr. Hampton. Dr. Hampton said Lane was created to train teachers and preachers, and that’s why it’s so important to him that the college return to that mission.