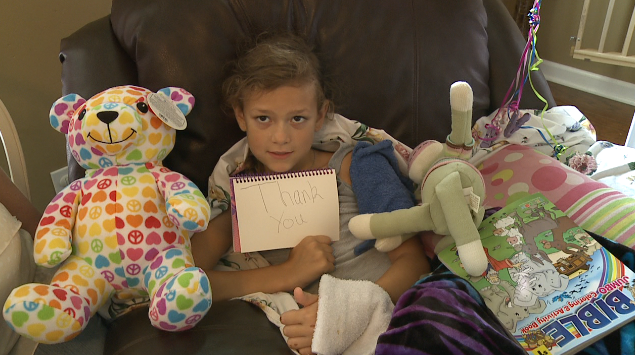 BELLS, Tenn. — The 8-year-old victim in a Gibson County hit-and-run is back home after four days in the hospital. Now on the road to recovery, Paige Helton and her mother sit down with WBBJ 7 Eyewitness News to talk for the first time about the crash that critically injured her and their neighbor. Paige suffered a broken leg and plenty of cuts, scrapes and bruises after Sunday’s hit-and-run in Humboldt. The family friend she was riding on a motorcycle with is still hospitalized. But now with the man believed to be responsible behind bars, the family says their focus is on moving forward. “I can’t get the picture of her laying in the middle of that road out of my mind,” Paige’s mother, Margo Helton, said. “That’s the part that gets me.” Now, one day before her 9th birthday, she’s back home. “She had a couple rough nights and a lot of pain,” Helton said. “When they cleaned her wounds, she screamed. When they put the cast on, she screamed.” Paige and her neighbor Mike Doss were riding on a motorcycle Sunday night when deputies say they were struck by Dwayne Brasfield after he ran a stop sign. Paige told police Brasfield got out to look but then took off. “If he would have helped her or stayed with her or held her hand, made sure she was OK,” Helton said. “That’s the part that gets me, an 8-year-old girl laying in the middle of the road.” But Paige stayed strong, even giving police information that helped track down Brasfield. “She said ‘no Mom, that’s not what the truck looked like,” Helton said. “So she knew. She knew what she was talking about.” Although Paige is now on the fast track to recovery, her family says their prayers are still with Doss who remains in an ICU in Memphis. “We really think that he pushed her off so she didn’t get the full force of the crash,” Helton said. “To us, he’s our hero.” As Paige’s family celebrates her homecoming and of course her birthday, they say it’s going to be hard to forgive and forget. “I do want justice for her,” Helton said. “But also a part of me can’t help but to forgive him, because he’s human too.” Paige’s family says they’ve been in constant contact with the Doss family and hope he and Paige can be reunited soon. Brasfield remains jailed in Gibson County in lieu of a $200,000 bond.