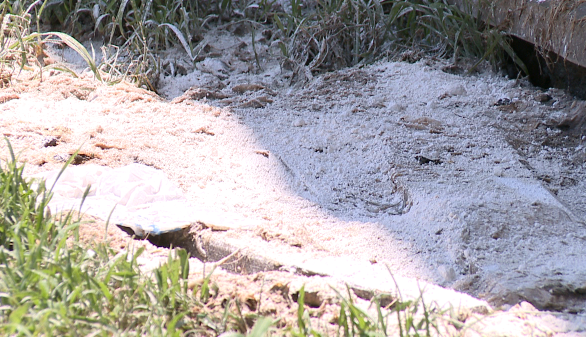 JACKSON, Tenn. — A sewage problem has more than foul odor hitting the air, according to residents at Guardian Courts Apartments. “For the past almost three weeks our toilets have been clogged up,” Deneen Newbill said. “We’ve got sewage coming out of the front.” Newbill has lived in the complex for nearly three years. “BM is floating over there in the grass with the water,” Newbill said. Property owner Paul Mundt said he was notified of the drain issue Wednesday. Mundt believes malicious tenants are responsible after the sewage line also clogged last week. “When we clear a sewer line, we’ll find underpants, we’ll find tampons, we’ll find wash cloths, we will find paper towels,” he said. “Various things like that definitely shouldn’t be flushed down a commode.” City inspectors said a complaint was made Wednesday with the building and housing codes department. Inspectors arrived Thursday morning to inspect the sewage line and said Mundt dealt with the issue appropriately. While WBBJ 7 Eyewitness News was at the apartment complex, a maintenance tech began spreading lime where the sewage appeared to be. “Think about how it would’ve smelt before they put the lime down,” Newbill said. “We have since gotten it cleared,” Mundt said. “We were unable to find out what was maliciously put into the sewer.” Residents said the sewage problem is not the only concern at the apartment. Several residents told WBBJ 7 Eyewitness News their apartments are infested with bed bugs. Mundt said the complex has had a problem with bedbugs. He believes they travel in with the tenants on suitcases. “We found no major evidence of a major infestation,” he said. Mundt says all apartments have been treated for the pest, but many residents showed our news team plastic bags with bed bugs inside they had collected from their apartments.