Henderson County firefighters give away hundreds of free smoke alarms 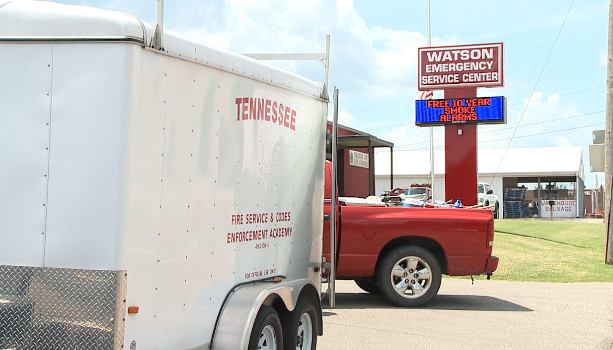 HENDERSON COUNTY, Tenn. — West Tennessee firefighters braved hot temperatures Saturday, walking door to door to help save lives. It’s a first of its kind program in the area, and it’s already breaking records. “The best way to save a life in a fire is to not have the fire happen in the first place,” Alex Daugherty with the Tennessee Fire Marshal’s Office said. “So smoke alarms are really the first step in that process.” The “Get Alarmed” program gives away thousands of free smoke alarms each year. “To date, we’ve installed more than 60,000 alarms in more than 20,000 homes,” Daugherty said. But for the first time since the project began, West Tennesseans are getting to take advantage, one alarm at a time. “Not all counties do this, so it’s a privilege to go out and to make sure that people are going to be safe,” Henderson County volunteer firefighter Bradley Overman said. “They can go to bed at night not having to worry about not waking up if something was to happen.” And that’s exactly how the McCay family felt after firefighters replaced their two broken alarms. “I think it’s going to save lives,” Ray McCay said. “I mean, I didn’t have one, it went out, so I appreciate the fire department coming and putting new ones up.” And with about two-thirds of fatal fires in Tennessee occurring in homes with no working smoke alarms, officials said it’s a device worth having. “They may be small and people may not think they need them, but they do need them,” Overman said. And as the alarms fly off the shelves, these firefighters said having the opportunity to protect their community is all the thanks they need. “You’d be amazed at the amount of appreciation people have,” Daugherty said. “With you coming to their home and installing one of these and talking about fire safety.” Officials say they gave away more than 300 smoke detectors Saturday, the most ever by a single department since the program began. If you live in Henderson County and need a smoke detector, call the fire department at 731-968-4153 and they’ll come and install one free of charge.