HENRY COUNTY, Tenn. — The Henry County Sheriff’s Office has created a “Safe Exchange Zone,” an area at the sheriff’s office where people can meet to exchange goods they may have sold or bought online. 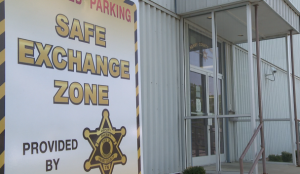 Sheriff Monte Belew said they decided to create this space to protect their community online and off.

“Today, a lot of people are buying off of Craigslist,” Capt. Damon Lowe said. “In years past, it’s always been kind of an iffy situation in meeting someone that you don’t know. We are now glad to offer this exchange zone.”

The “Safe Exchange Zone,” which opened on Wednesday, is a section of the parking lot just outside the doors of the Henry County Sheriff’s Office. It has 24-hour surveillance. The sheriff urges people who are buying or selling to someone they’ve never met to meet there.

“It’s a safe location. You don’t have to worry about meeting in some isolated place. You don’t know what will ever happen there,” Capt. Lowe said.

Deputies say this area isn’t just for online shopping. You can use it anytime you need to meet with someone whether you know them or not.

“We also like to offer this safe exchange zone for anyone who has a domestic situation and they need to exchange a child or some type of child custody matters,” Lowe said.

Leslie Reece said her daughter has made purchases off of Craigslist in the past and wishes something like the exchange zone would have been available then.

“It just gives you that extra safety. It’s got an address so it’s easy to find for the person that you’re dealing with and for you,” she said.

Capt. Lowe said the sheriff’s office decided to set up the Safe Exchange Zone after an elderly couple in Georgia was killed last year during a Craigslist exchange, and the force wants to do everything they can to protect their community.

“We don’t want any mishaps here in Henry County,” he said.

The sheriff said the area is open 24/7 and is free for the public.

Lowe said all of the security footage will be archived and available for anyone who might need the records in the future.