JACKSON, Tenn. — Drivers hit the highway for the long Fourth of July holiday weekend. Law enforcement said they will also be on the road looking for dangerous drivers. 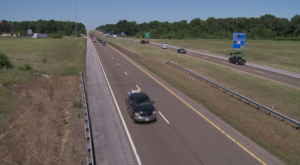 Will Norris and his family are driving from North Carolina to Texas. “We have three young kids, so we decided to break the trip up into several days,” he said.

AAA said airports will be just as crowded thanks to low fuel prices making it more affordable to fly. “TSA lines at the airports are insanely long,” Tabatha Davis, a traveler, said.

AAA expects 3.3 million Americans to fly this Independence Day. Davis and her family just got back from Florida. “Getting through security takes a while,” she said. “There were a lot of flight delays.”

The Tennessee Highway Patrol said it will use data-driven enforcement Friday through Monday to target areas where crashes may occur, plus conduct sobriety and seat belt checkpoints.

Morris said the drive has not been bad. “The roads are generally pretty good,” he said. “There’s a few accidents here and there.”