MEDINA, Tenn. — A routine walk through a student parking lot by a student resource officer has landed a South Gibson County High School student in trouble with law enforcement. 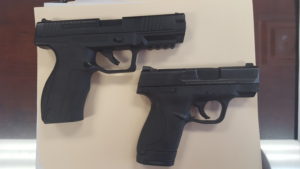 Caleb Butler, 18, has been charged with possession of a weapon on school property and possession with intent to sell in a drug-free zone after authorities discovered a BB gun and un-prescribed drugs in his vehicle. The high school’s resource officer was conducting a safety check through the student parking lot when he noticed the gun. After a thorough search, the pistol was identified as a BB gun.

Gibson County Sheriff Paul Thomas released an image of a service weapon next to the BB gun so people can understand how similar the two look.

“After the fact, yeah, we can view it as just a BB gun, but before you determine that you treat it just like it’s a real weapon because you don’t know,” Sheriff Thomas said.

Some BB guns may have colors on them to show a difference, but they can still look like a real weapon.

“Occasionally, the tip of them will be red or blue,” Sheriff Thomas said. “I’ve seen them both ways. but then you can still buy them the solid black. We see them all the time.”

Deputies also discovered a plastic bag with multiple Adderall pills in the center console of the vehicle. The school’s resource officer said Butler told him he did not have a prescription for them.

“That’s a real popular abused prescription pill, and they don’t have a prescription for it and they have more than one or two pills, historically speaking they typically do sell some of them to help pay for what they use.”

Sheriff Thomas said it’s still under investigation whether Butler was using or selling the drugs. He was arrested and taken to the Gibson County Correctional Complex and later released on a $25,000 bond.

Butler’s court date is set for Wednesday in Humboldt General Sessions Court. District leaders have not commented on Butler’s status with the school.