JACKSON, Tenn. — It’s the night “The Wolves,” as they call themselves, have been waiting for. 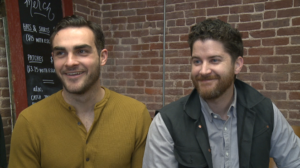 Lee Wilson and Hilmar Skagfield appear on the finale of the CBS pilot season of Hunted Wednesday night.

“This last episode I think is our gut check,” Skagfield said. “I mean, it is going to get pretty wild.”

“Every single choice you make is more likely a bad choice than a good choice, and it doesn’t matter the scale. I mean, it can be what you eat for lunch,” Wilson said.

What started with nine teams has been reduced to three. The two Jackson locals are in that final trio. Wilson owns Jackson Escape Rooms and talked about their team strategy.

“The things we do on the show, that have a pranky type vibe, really that’s about counter-intelligence,” Wilson said. “That’s about pushing bad, confusing, complicated information into the pipeline and forcing them to have to figure out what’s real and what’s fake.”

The team claims part of their experience involves messing with the experts’ amount of intelligence.

“Community, resources and information — whoever controls those has the power,” Skagfield said. “When you’re looking at especially information, information can go two ways. It can be correct information or it can be bad information.”

The duo met at Union University after Skagfield’s dorm was destroyed in 2008 by a tornado. Wilson and his wife gave him a place to stay.

Being on the run created a much greater bond.

“We were just trolling riff, left and right, every hour of the day was trying to plot how we were going to get back at these hunters,” Skagfield said.

Wednesday, for the first time, they’ll be able to watch their fate unfold in the same living room. What can we expect to see?

“Can you deliver when you have nothing left in you, mentally, emotionally, physically? That’s what this last episode is about,” Wilson said.