“It means so much, and to see the individuals, the friends who turned out to witness this day, I am very honored,” Dr. Wright said. 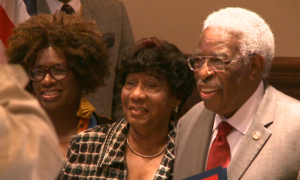 “Dr. Melvin Wright has done so much for the city of Jackson and serving in so many capacities,” council member Harvey Buchanan said. “He is a humanitarian in all the sense of the word. We are proud he made Jackson his home.”

Along with his practice, he has served as president of the Rotary Club, Chamber, and served on countless boards such as the Jackson Symphony and United Way.

He joined the military before having his practice and said especially during times of racial tension and injustice he wanted to be involved in his community.

“I said once I got out, I was going to become involved in the community to the extent I was allowed,” Dr. Wright said.

Dr. Wright said he’s thankful for the people who have given him the chance to lead. He continues to practice dentistry.

City leaders said there’s something to be learned from this legacy.

Wright will move his office in a few months, and he said retirement isn’t in the picture anytime soon.