MADISON COUNTY, Tenn. — The Tennessee Department of Transportation launched a new campaign Wednesday to keep its workers safe. The agency said three were killed on the job in 2016. 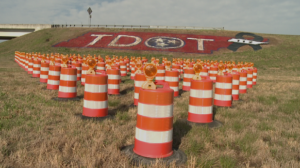 Drive west on Interstate 40. At exit 76, you will pass a black ribbon and 112 orange cones. Each cone represents a TDOT worker killed in the job.

Knoll said TDOT lost three workers in 2016, including one in Crockett County. The agency launched a new campaign Wednesday called “Work With Us.”

“If they see a person or a flashing light on the side of the road, please slow down and move over,” Knoll said.

Drivers told WBBJ 7 Eyewitness News they see a lot of distracted driving in work zones. “A lot of times I wonder why folks are going by so fast or not paying attention,” Linda Lairamore said.

Knoll wants drivers to be careful, especially when there is construction. “Anticipate you’re going to have to slow down a little bit,” he said. “Anticipate that anything could happen.”

State law requires drivers to move over if possible when they see an emergency vehicle. Get caught speeding in a work zone and be prepared to pay a minimum $250 fine.

TDOT held a special ceremony in Middle Tennessee on Wednesday at the agency’s fallen worker monument and revealed the name of the most recent worker killed on the job.

You can find more information about TDOT’s “Work With Us” campaign and see their PSA at the TDOT website.