Spectators of all ages come to the Shiloh 155th Anniversary Reenactment

SHILOH, Tenn. — The sound of cannons and smoke filled the air at the Shiloh 155th Anniversary Reenactment Sunday afternoon. 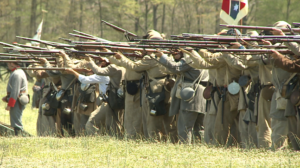 The American Civil War and what happened to us, it bonded us back together stronger than we were way before the civil war and made us one whole nation,” said Robert Beams, a confederate artillery commander reenactor.

Beams is just one of about two thousand reenactors who all play a part in putting together an accurate portrayal of what happened on these very grounds so long ago.

“It feels wonderful. It puts chill bumps on you when you’re out there in that battlefield and you see scenes and stuff that will take you back there in a period of time that you just cant see and feel when your watching a movie,” said Beams, “but when your out here, you can see it and feel it.”

Spectators we spoke with at the reenactment say, they appreciate the effort put into making history come to life. 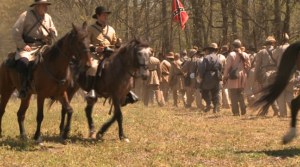 “And I feel for the ones that go through the money and the travel and the time spent doing it, just for people to come and watch and hopefully learn something,” said spectator Deanna Yow.

Deanna and her family drove all the way from Mississippi this morning, to watch a battle her husband says gets better every year.

“We have a battle in Mississippi where I’m from, but I’ve just always liked Shiloh better,” Trent said, “because it was a lot bigger battle.”

“I want her to learn about her history, and the history from the civil war up,” said Deanna. “I think its good for all kids to know what made America what it is.”

If you are interested in learning more about the Battle of Shiloh, the National Military Park is open seven days a week.