HARDIN COUNTY, Tenn. — The man who says he believes he traded drugs for the alleged murder weapon used to kill Holly Bobo took the stand Friday in the fifth day of the murder trial. At one point in his chilling testimony he broke down in tears on the stand. 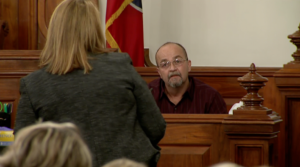 Victor Dinsmore says he thinks he traded drugs for what could be the gun used to kill Holly Bobo.

Dinsmore says he sold drugs in 2011 and told the court what he says happened starting April 13, 2011, the day Holly Bobo disappeared.

“Zach and Shayne and Train pulled up in Dylan’s truck,” Dinsmore said. He says that afternoon they arrived wanting more drugs.

“Within two to three minutes, Zach and Shayne Austin were fighting,” Dinsmore said. “I heard a few spurts out of their mouths about ‘who was going to hit it first’ and I never put it together at all.”

“Jumping around basically. Swung at each other a couple of times,” Dinsmore said. “I think Zach hit Shayne and blacked his eye. That’s about all there was.”

Two days later, the one-time convicted rapist says he met up with the group again. This time instead of money for the drugs, they offered a gun.

He says he couldn’t carry the gun himself but thought he would give it to his wife.

“I gave that gun to my wife because of what happened to Holly to protect herself,” Dinsmore said. He says some time later he told his wife to get rid of the gun.

“I was afraid it had a body on it,” Dinsmore said.

Dinsmore says at some point they dumped the gun off Joe Holiday Road before moving his family to Indiana. He says when he realized the connection to Holly Bobo, he called authorities and came back to help them find the gun.

The defense asked Dinsmore about a possible reward.

“Money doesn’t matter to me,” Dinsmore said. “I won’t take it. Yes, I’m aware there’s a reward, and it’s not about money.”

Dinsmore acknowledged his son was murdered and said he wants to help the Bobo family.

“I didn’t do this for the money,” Dinsmore said. “I know how Mr. and Mrs. Bobo felt. And I wanted to help any way I could.”

Dinsmore has a federal immunity deal in the case.