“The call came in as a possible fire and explosion but it was not that,” said Benton County EMA Director Richard Kee. 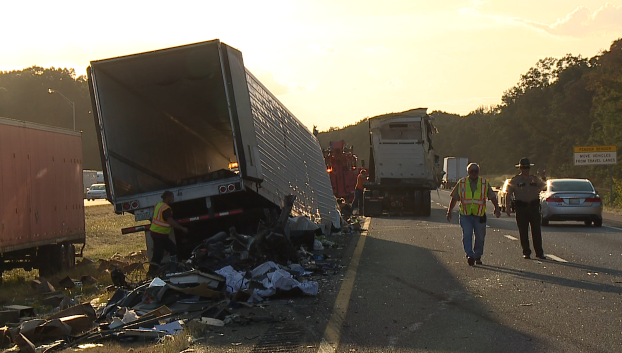 Benton County EMA Director Richard Kee said the call was actually for one semi truck hitting another, making a sound so loud drivers thought it was an explosion.

According to the Tennessee Highway Patrol, around 4:45pm Sunday afternoon, one person suffered non life threatening injuries and was airlifted to Vanderbilt in Nashville from the 2 truck accident on I-40 near mile marker 130.

“His trailer broke in 2, he was carrying lotion and mouthwash,” said Kee.

Plus a few other things like rubbing alcohol and Epsom salt, spilled all over the road.

EMA Director Kee said this is one of the most interesting calls he’s gotten since being a first responder. He said he could smell mouthwash from a mile away before even getting to the accident.

A huge mess was left for workers to clean up.

“It could have been a lot worse, I think it probably helped him by throwing him out of it, not really for sure on that, it did destroy the tractor that he was driving,” said Kee.

The identity of the driver has not been released.