JACKSON, Tenn. — It’s been over 200 years since the last major earthquake hit the central United States. February 7th marks the 208th anniversary of a destructive 7.8 magnitude earthquake with its epicenter just 4 miles south of Reelfoot Lake occurring in 1812.

The earthquake was part of a sequence of three very large earthquakes known as The Great Midwest Earthquakes of 1811 or The New Madrid Earthquakes, which occurred from 1811-1812. Its range of impact included parts of Missouri, Tennessee, Arkansas, Kentucky, and Illinois and caused widespread damage to several settlements along the Mississippi River. Below is a simulation for what the shaking would look like across the Mid-South were a 7.7 magnitude earthquake to happen today.

According to the United States Geological Survey, the recurrence of earthquakes similar to the ones during that period have occurred at least twice prior to the 1811-1812 sequence. There were major earthquakes recorded around 900 and 1450 A.D, an interval of about 500 years. However, the recency of earthquakes greater than magnitude 3 has declined over the last several decades. 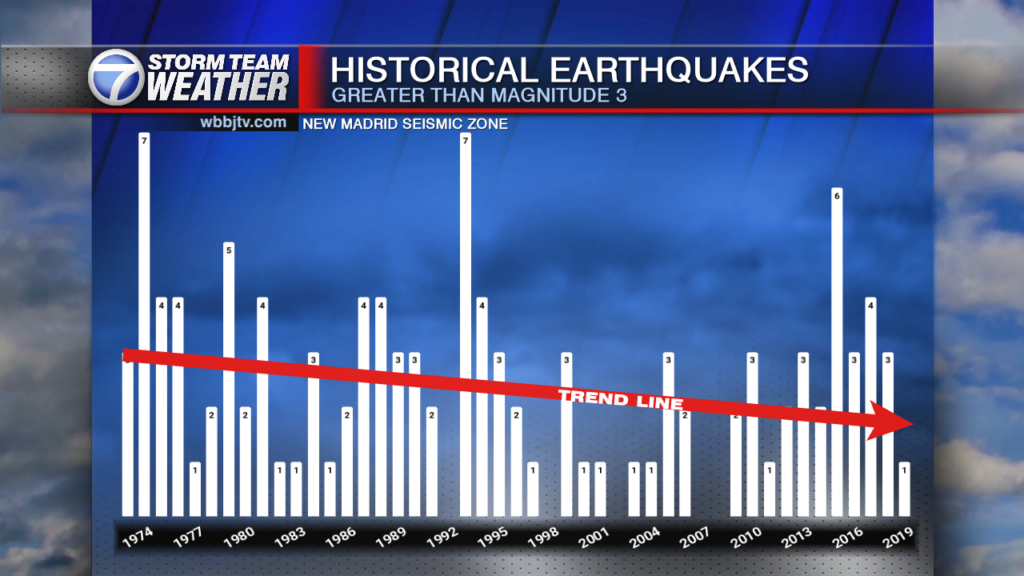 West Tennessee is no stranger to earthquakes. Although not on the same magnitude as the New Madrid Earthquakes, a series of smaller quakes have frequented the area in recent years. As of February 5th, 2020, there have been at least 247 recorded earthquakes below magnitude 4.0 in West Tennessee since January 2019. The latest earthquake, a magnitude 2.8 on February 4th, 2020 in Dyersburg, Tennessee, was the strongest earthquake in the area since the 3.7 magnitude earthquake April 24, 2019.

It’s estimated over the next 50 years that there is a 25 to 40 percent chance for a magnitude 6.0 or greater earthquake to occur. There is also less than a 10 percent chance for one similar to the 1811-1812 earthquakes to occur around what is called the New Madrid Seismic Zone. What do you think? Should West Tennessee prepare for a major earthquake to take place in the near future? Let us know what you think!