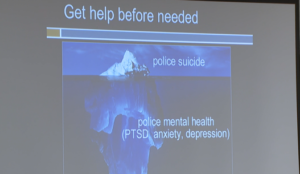 “Police officers have stress everyday, answering one call after another,” said Madison County Sheriff John Mehr. “We see the worst there can be, you know, when it’s a child death or it’s something else. Officers never have a release. ”

The PBA is a professional law enforcement organization who provide anything from financial support to education for officers.

The seminar on Monday served as a training tool for officers to understand more about the signs of law enforcement officer suicide.

Retired police officer Donna Schulz said within the past year, close to 230 suicides of first responders have been reported

“We are losing some of America’s finest to suicide and not doing anything about it,” Schulz said.

Schulz says the seminar helps to explain ways they can stay strong and get help. Schulz had her own suicide story after losing her husband 25 years ago.

“He was my rock,” Schulz said. “He was an FBI agent, he was a Tallahassee cop, he served in Vietnam, but he could not cope any longer and took his own life. And I would give anything if I had known then what I know now, maybe I could have helped save him.”

The goal is to hopefully help those in law enforcement be more comfortable talking about suicide and any stigma there could be with getting help, including voluntary mental health check ups.

“In fact, our mantra is it takes courage to ask for help. Be courageous and get that help when you need it,” Schulz said.

The PBA says that suicide researchers and Centers for Disease Control and Prevention rank law enforcement suicide among the highest segment in the nation.

You can find out more about the initiative established to combat law enforcement officer suicide here.