BRADFORD, Tenn. — A local post office is having to make repairs after a car plowed into the building.

Post offices typically don’t have drive-thrus, but this one in Bradford did for a few hours Tuesday — unintentionally, of course.

“It shook the building next door, because our buildings are so close to each other,” said Tara Reynolds, who works at a nutrition store next to the post office.

Reynolds said she looked outside just in time to see the vehicle roll across the street and into the building.

“I initially thought they were coming into us, and I was like, ‘Oh, they’re going to the post office.’ They just kept going. I saw it, then I heard it. It was loud,” Reynolds said.

Reynolds said after she called 911, her first thought was the employees at the office. But fortunately, they had left for lunch just nine minutes prior.

“I said, ‘You don’t know how thankful I am to see your face’,” Reynolds said.

The car made it all the way past the front desk, and threw glass, furniture and supplies all over the office.

But as the saying goes, neither snow, nor rain, nor heat, nor — a car in the lobby — will keep the post office closed.

“Oh yeah, they had it taken care of last night,” Reynolds said. “We have some good people here. They were up here late last night getting the wood put up.” 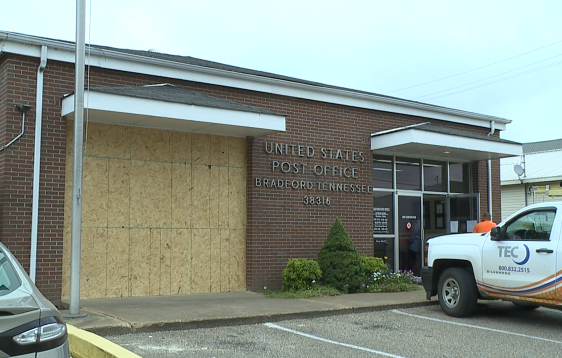 The post office employees told us we couldn’t come inside to get footage, and they couldn’t talk on camera. But, they’re very thankful everyone ended up being okay.

The office is back up and running. Their phone lines were out, but someone was there fixing them Wednesday morning.