LEXINGTON, Tenn. — Some residents in one county spoke to officials about a new industry coming to their community. 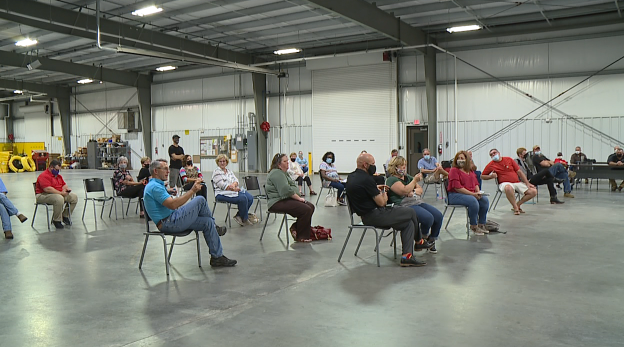 “I’ve lived here my whole life, I’ve actually lived in the same house since I was two years old. It’s less than a mile away from the site of these 24 agricultural monstrosities,” Henderson County resident Jackie Washburn said.

Washburn lives in Henderson County, where Tyson will have several industrial chicken barns.

At the Lexington city meeting Tuesday evening, residents from the county spoke with city officials, and the city utilities, about the barns.

Lexington Utilities is slated to provide the utilities to the barns.

Officials said they already planned these utility lines, but upgraded them to accommodate the chicken barns.

“We already had this line in the works because of pressure issues we have in this part of Henderson County, in the Westover community along Highway 412 West,” Lexington Utilities general manager Michael Harper said.

“For the spur line and the main transmission line right now, probably about $1.3, $1.4 million, which is considerably less than what we were expecting,” Harper said.

Residents got the chance to speak their minds on the barns at the end of the meeting.

They expressed concerns about traffic, the environment, the smell, among other things.

“Our county is an agricultural county, this is not farming. This is industry that is carried on at the expense of the people who live around it,” Washburn said.

Harper said this project will improve the economy in the area.

“Tyson works to be a good community partner and we’ve been in communication with local officials, West Tennessee Farm Bureau and the Tennessee Poultry Association to keep them informed as we prepare to begin operations next year.

Tyson contracts with independent poultry farmers who agree to follow state, federal, and local laws. To our knowledge, the farmers we’re contracting with are following these laws.

Last week, Tyson hosted a local farm tour with Henderson County officials. They have been great to work with and we’ll continue to work closely with them.”