Woman involved in hit and run incident speaks out

JACKSON, Tenn. — Terica Paterson is recovering after she says she was struck by a vehicle in downtown Jackson. 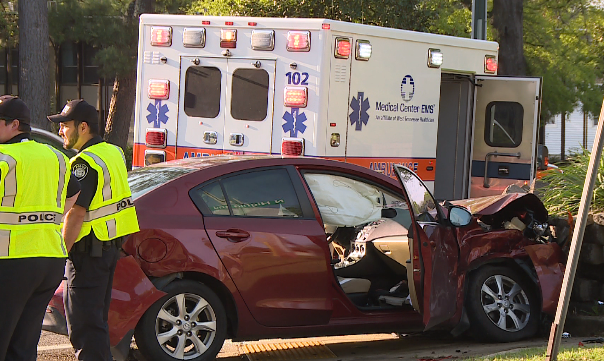 After suffering multiple injuries, she says she wants the person who did this to come forward.

Around 7 a.m. Monday, police responded to an hit and run on Division Avenue and North Highland.

Patterson was in her car at a nearby stop sign when she says another car drove past, speeding and hit her. Afterwards, she says the person in the car vanishes from the scene.

“I was coming up the street and I stopped. It was a champagne looking truck in front of me, getting ready to turn the opposite way. I waited and a white car had past and I waited to make sure another car wasn’t coming,” Patterson said.

In a police report, officers say they were unable to identify the owner of the vehicle that hit Patterson because there was no license plate.

After going to the hospital, Patterson says doctors told her she suffered severe injuries.

“They said that I had bruising on my left lung, and it was leaking out air,” she said. “I have swelling on one side of my body and a bruise on the other side.”

Patterson says she has witnessed many other incidents in the area, and says she has advice for people driving on that road.

“Just to be careful and not speed down toward the area. Drive cautiously through the speed limit, and if you’re turning double, check before you turn all the way,” Patterson said. “They probably need to put traffic lights out here. That will help also.”

If anybody has information about this hit and run incident, you are asked to call the Jackson Police Department at (731) 425-8400.