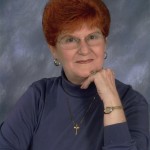 Peggy was born July 29, 1939 in Memphis, Tennessee, the daughter of the late William Albert “Bill” Stewart, Jr. and Shirley Cawthon Stewart. She graduated from Millington High School and was married April 4, 1961 to W.A. “Brown” Williamson. She was a resident of Slayden, Mississippi for forty years and employed as a hairdresser before her retirement. Peggy was a member of Morris Memorial Baptist Church in Moscow, Tennessee where she sang in the choir.