JACKSON, Tenn. — Figuring out where you’ll continue your athletic career is a tough decision. 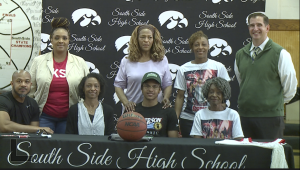 The system, the fit, and the ones around you matter. So if some school can check off all three, then it’s probably the place for you.

Erico Sain out of south side high school chose to further his collegiate athletic career on Thursday by signing with Columbia State.

Sain helped lead the Hawks to the state tournament this past year and was A Mr Basketball finalist this past season.

He submitted his place in South Side history with scoring over 1,000 career points and a state title.

He has an all around game that consist of scoring and just flat out having an impact that makes his team better.

I caught up with Sain after his signing and he talked about how he knew Columbia was the place for him, plus what he would tell others to do
that want to be in his position.

“I can tell by the way he runs, his team, that he has some South Side in his system and that was the perfect system and what
he wanted me to do, I was already good at. So I got to just develop it for college. Don’t let other people determine where you get because I promise you, it’s up to you. It’s up how hard you work the time you put in its up to you. You can do it,” Sain said.

Sain also said how he is a guy that will do the little things for his team and plans to be a two way guard.