(AP) –Moviegoing audiences chose the horror movie over the romantic comedy to kick off the month of October. Paramount’s ” Smile ” topped the North American charts with $22 million in ticket sales, according to studio estimates Sunday, leaving Billy Eichner’s rom-com “Bros” in the dust. 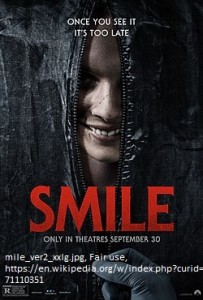 Universal’s ” Bros ” launched with an estimated $4.8 million to take fourth place behind “Don’t Worry Darling” ($7.3 million) and “The Woman King” ($7 million). But opening weekends likely aren’t the final word on either “Bros” or “Smile.” Horror movie audiences are generally front-loaded, dropping off steeply after the first weekend, while something like “Bros,” which got great reviews and an A CinemaScore, suggesting strong word-of-mouth potential, is a movie that could continue finding audiences through the fall.

“Bros” is significant for being the first gay rom-com given a wide theatrical release by a major studio, as well as the first studio movie starring and co-written by an openly gay man. Since premiering at the Toronto International Film Festival last month, the film has gotten stellar reviews from critics and also been the target of “review bombs” on IMDB. The site last week removed removed hundreds of one-star reviews for “Bros” that were logged before the film was released.