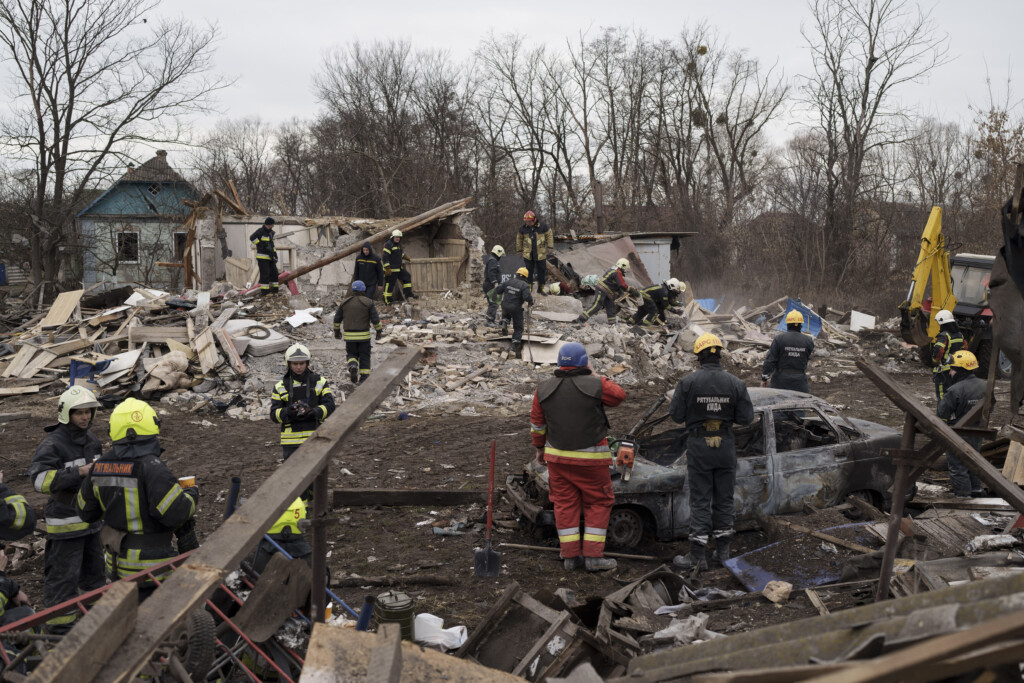 Russia dispatched explosive drones to selected regions overnight before broadening the barrage with air and sea-based missiles, the Ukrainian air force said. Air-raid sirens rang out across the country, and the military activated air-defense systems in Kyiv, the regional administration said.

Russia has attacked Ukrainian power and water supplies almost weekly since October while its ground forces struggle to hold ground and advance. Mayor Vitali Klitschko warned of power outages in the capital, asking people to stockpile water and to charge their electronic devices.

“There can be no ‘neutrality’ in the face of such mass war crimes. Pretending to be ‘neutral’ equals taking Russia’s side,” Kuleba tweeted.

After more than 10 months of fighting, Russia and Ukraine are locked in a grinding battle of attrition. The Ukrainian military has reclaimed swaths of Russian-occupied territory in the country’s northeast and south, and continues to resist persistent Russia attempts to seize all of the industrial Donbas region in the east.

At the same time, Moscow has targeted Ukrainian power facilities and other key infrastructure in a bid to weaken the country’s resolve and force it to negotiate on Russian terms. The time between strikes has increased in recent weeks, though, leading some commentators to theorize Russia is trying to ration its missile supply.

The Ukrainian military has reported success in shooting down incoming Russian missiles and explosive drones in earlier attacks but many cities have gone without heat, internet and electricity for hours or days at a time.

Ukrainian Prime Minister Denys Shmyhal said a number of energy facilities were damaged during what he said was the 10th such large-scale attack on his country.

“Russia is trying to deprive Ukrainians of light before the New Year,” Shmyhal wrote in a Telegram post. He said that emergency blackouts may be necessary “in some areas.”

About 90% of Lviv was without electricity, Mayor Andriy Sadovyi wrote on Telegram. Trams and trolley buses were not working, and residents might experience water interruptions, he said.

Meanwhile, a Telegram channel affiliated with the presidential press service of Belarus said a Ukrainian S-300 air defense missile landed in Belarusian territory of Belarus early Thursday. It said the missile could have veered off course accidentally and there were no casualties.

The Belarusian Defense Ministry said later that the missile was downed by the Belarusian air defense over the western Brest region and fell into a field, according to a statement carried by the state Belta news agency

Belarus served as a staging ground for Russia’s Feb. 24 invasion of Ukraine.

Belarus’ foreign ministry summoned the Ukrainian ambassador to express “strong protest,” it said, demanding that Ukraine “conduct a thorough investigation” and “hold those responsible to account.”

The United States said this month that it would give a Patriot missile battery to Ukraine to boost the country’s defense. The U.S. and other allies also pledged to provide energy-related equipment to help Ukraine withstand the attacks on its infrastructure.

Kuleba, the Ukrainian foreign minister, said Monday that his nation wants a “peace” summit within two months at the United Nations with Secretary-General António Guterres as mediator. He said Russia must face a war-crimes tribunal before his country directly talks with Moscow but that other nations should feel free to engage with the Russians.

Commenting on the summit proposal Thursday, Russian Foreign Ministry spokeswoman Maria Zakharova dismissed it as “delirious” and “hollow,” describing the proposal as a “publicity stunt by Washington that tries to cast the Kyiv regime as a peacemaker.”

Russian officials have said that any peace plan can only proceed from Kyiv’s recognition of Russia’s sovereignty over the regions it illegally annexed from Ukraine in September.

A 10-point peace plan Zelensky’y first presented at a November Group of 20 summit in Bali includes the full restoration of Ukraine’s territorial integrity, the withdrawal of Russian troops, the release of all prisoners, a tribunal for those responsible for the aggression and security guarantees for Ukraine.