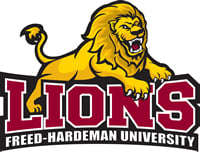 The Freed-Hardeman University Lady Lions held off a second half comeback attempt by Campbellsville University to win the quarterfinal match up 79-74 and advance to the semifinals in the NAIA Division 1 Women’s National Championship. The game pitted the two top scorers in the league against each other. FHU’s Meribeth Boehler is the NAIA’s leading scorer and Campbellsville’s Whitney Ballinger is a close second. The Lady Lions jumped out to an early lead and held a 14 point advantage at the half (39-25). But, a full court press from the Lady Tigers helped them to cut the margin to two (62-60) in the second half. Campbellsville never got closer though. A well timed three-pointer by FHU’s Whitney Johnson and solid free throw shooting helped the Lady Lions pull out the win. Boehler (of Ramer, Tenn) finished the game with 35 points and leads the tournament in scoring with 85 points in three games. Whitney Johnson (of Lexington, Tenn.) finished with a double-double (15 points, 11 assists). This will be Johnson and Boehler’s second trip to the Fab Four round. The pair were freshmen when the team made the semifinal round in 2008. Freed-Hardeman is set to face Azusa Pacific at the Oman Arena, Monday night at 8:00 p.m. Last year, Azusa Pacific ousted FHU from the 2009 tournament in the second round.