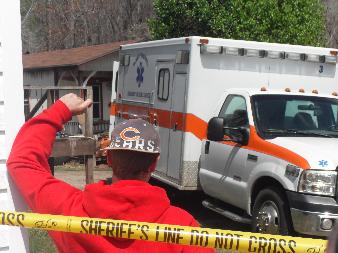 McNairy County Fire Department was called out to the 900 block of Bud Long Road in Selmer around 10 a.m. this morning. A neighbor said he saw smoke coming from a work shed behind a house. The neighbor tried to extinguish the fire with a garden hose, but was unsuccessful. “He was a local resident… he lived by himself here for about a year and had friends that would come by and check on him pretty regularly,” says Sheriff Guy Buck of the McNairy County Sheriff’s Department. The man has been identified as 52-year old Ricky Kyle. Kyle’s family was called to the scene shortly after the neighbor discovered the fire. Visibly shaken, his son looked as his father’s body was being brought from the chard shed to an awaiting ambulance. “We just good friends from way back yonder….we growed up together… I knew his daddy and momma… knew them real well… and they was good people,” says Teddy Dunaway, a neighbor and longtime friend. Dunaway says he and others would check on Kyle and that’s how the fire was discovered. “He was just a good ole boy.. he had his ups and downs just like we did… live by himself… I live by myself… I just can’t believe something like this happened,” says Dunaway Sheriff Buck says they don’t know what started the fatal fire at this point. “We called the state bomb investigators… they are on the scene… they are conducting the investigation,” says Sheriff Buck. Kyle’s body has been taken to Memphis for an autopsy.

Pleasant Father's Day Ahead With Rain and Cooler Temperatures Following