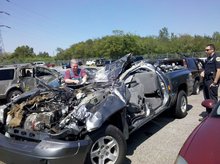 JACKSON, Tenn. – We see it every day, drivers distracted by everything from cell phones to children to eating. In fact, we in Tennessee, may be seeing it more than anywhere else in the country. The National Highway Traffic Safety Administration and the National Safety Council have placed Tennessee at the top when it comes to wrecks associated with distracted driving. Though both New York and California score high on the number of fatal cell phone related crashes, the Volunteer State was off the charts. The NSC found that 10.6 percent of all fatal crashes in Tennessee involved the use of a cell phone. That‘s ten times the average, and well beyond that of states like New Jersey and Massachusetts. West Tennessean John Mark Johnson knows the consequences of driving distracted as well as anyone. His brother Terry died in August of 2011 in a crash caused by a woman on her cell phone. “She lost control talking on the phone, jumped an embankment and landed on top of his truck,” Johnson recalled. “He was killed instantly.” Experts say we trick ourselves into thinking we are immune from causing these kinds of tragedies. “Of course, nobody thinks it’s going to happen to them,” said Lt. Brad Wilbanks of the Tennessee Highway Patrol. “But everyday it happens to someone.” Statistics from the THP shows reading a three word text takes an average of seven seconds. And seven seconds with your eyes off the road can have fatal consequences Current state law allows a driver to talk on the phone while behind the wheel. However, texting while driving is illegal statewide. “If you’re texting and driving, you can face criminal charges or end up in prison for sending a text while driving,” warned Lt. Wilbanks. “It’s just not worth it.” Figures show one out of every ten wrecks in Tennessee where someone loses their life, a cell phone is to blame. The Johnson family shares their story in hopes of lowering that statistic. “We did not need to lose a brother over a phone call that could have waited,” said Johnson. The THP encourages parents to teach their children the dangers of being distracted behind the wheel, as soon as they start driving. Safety experts say teaching by example can be the best way. There are also smartphone apps available that can prevent drivers from texting while their car is moving.