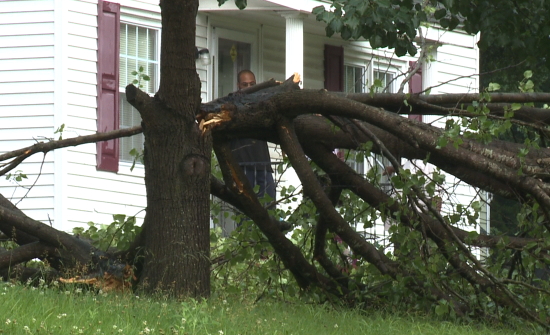 JACKSON, Tenn. — Strong storms made their way through West Tennessee Monday afternoon, sweeping through Crockett, Carroll and Madison counties. On Muse Street, a tree fell into a house, knocking down some power lines with it, according to the Jackson Fire Department. Members of JEA were on scene making repairs. In west Jackson, crews worked to repair a broken power pole along Hollywood Drive. A portion of the road was blocked off while workers made repairs. A spokesman for Jackson Energy Authority said at the peak of the storm, nearly 700 customers in the Old Hickory Boulevard and Hollywood Drive areas were without power. As of early Monday evening, that number had been been whittled down to 200. WBBJ 7 Eyewitness News also received similar calls Monday from Bells and other areas, including reports of quarter-sized hail and unusually strong winds.