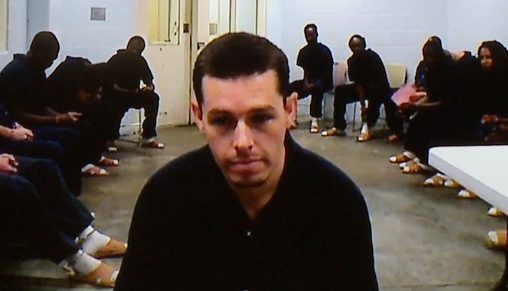 JACKSON, Tenn. — An escaped inmate out of Lawrence County who eluded local law enforcement in a high-speed chase before later being captured appeared Monday in Jackson City Court. Jason Kirk faces charges of evading arrest and theft of property over $10,000. Jackson police spotted Kirk Wednesday as he drove a black 2015 Ford Mustang onto a Highway 45 Bypass exit ramp to head westbound on Interstate 40, according to an affidavit. When officers tried to pull the car over, they say Kirk led them on a pursuit at speeds of more than 130 miles per hour. Police terminated the pursuit but then observed the car enter a rest stop at mile marker 73, according to the affidavit. Police then recovered the car, but Kirk was nowhere to be found. Ford of Murfreesboro later confirmed the Mustang was stolen from their lot. After his Thursday arrest in west Madison County, police say Kirk admitted to stealing the Mustang from the dealership after escaping from the Lawrence County Jail and finding the car unlocked with the key laying in the seat. Kirk is being held in the Madison County Jail in lieu of a $100,000 bond.