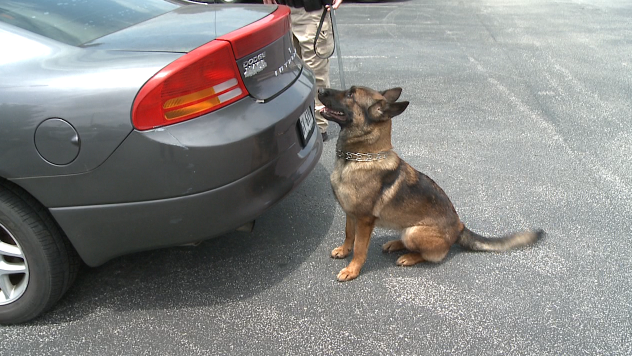 GIBSON COUNTY, Tenn. — Officers make two drug arrests in Gibson County in less than two days, due in part to the help of K-9 officers. Now as the county is looking to add even more four-legged officers to the streets, the departments hopes to keep the momentum going. “Drug arrests have gone up with the K-9s, vehicle seizures and even our money seizures,” Gibson County Sheriff Paul Thomas said. No matter how big or how small, officers say each of Gibson County’s three K-9s are getting things done. “Every day that I get out there and run the dog and I find narcotics, all of it’s big to me,” Milan Police Lt. Kelvin Whitney said. On Monday, Whitney said he and his dog Oakley discovered drugs on Elizabeth Fowler and Kyle Taylor, both of Florida, after being suspected of shoplifting from Walmart. Earlier that morning, Dyer police said they found a meth lab inside a home on High Street with the help of a sheriff’s department K-9. “I was surprised that they did, me living so close,” said Linda Moore, who lives next door to the home where the lab was found. “But I’m glad they did, and they’re doing a great job.” The sheriff’s department said with more and more drug dogs being added to the streets it’s helping them cover a wider area around Gibson County. “We’ve got a large population and inmate population. We have a very large county,” Sheriff Thomas said. “Having one dog per shift is going to be a huge asset.” With a drug problem that seems to finally be taking a hit, deputies say the dogs are a priceless asset and are paying for themselves. “No tax dollars were used to buy the dogs, for their vehicles or the vet bills and food,” Thomas said. “It’s all money from the drug fund.” From the bigger county to small towns like Milan, officers said the dogs make all the difference. “Once the word gets out about K-9s and stuff like that, I think it’s going to slow the drug trade down going through small towns,” Lt. Whitney said. Sheriff Thomas said they expect to add another multi-use K-9 to the Gibson County Sheriff’s Department this fall. The Humboldt Police Department said it will be adding one as well. That will bring the total number of K-9s in Gibson County to five.