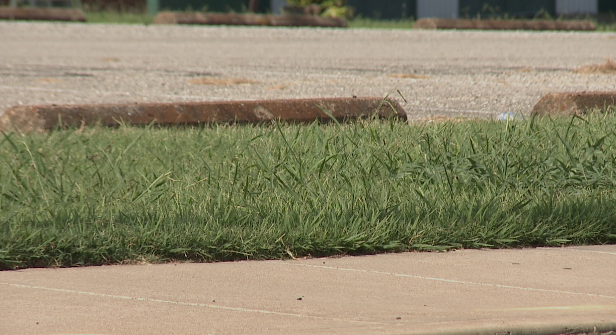 JACKSON, Tenn. — Jackson-Madison County schools rush to get their grounds ready for students. Grass at Jackson Central-Merry, Alexander Elementary, and North Side High School still stands several inches high. “It don’t look good, but you know, I don’t know how often you’d have to mow it to make it look good,” Tracy Wooten said. Wooten lives across the street from North Side. The Jackson-Madison County School System said they have a contract with GCA, a private company, that cuts the grass. JMCSS Marketing and Public Relations Specialist Ginger Carver said they are working 12 hours a day to get caught up. “If they have to, they’ll work through the weekend to ensure that all of the grass is cut for the schools,” Carver said. The district said they typically cut the grass at schools every 14 days. “We’ve had a very wet July, so they may have gotten behind on a couple of those,” Carver said. Parent Leslie Lewis has a daughter at North Side and said the grass is fine. “When I was a kid we played in grass, and that grass is not too high,” he said. Wooten said he sees workers mow at North Side but that the grass grows quickly. “I know how bad it is to get out and cut grass because I do it myself,” he said. “It’s not an easy job.” The district said they started contracting out the lawn work last summer in an effort to save money. The school system plans to host a beautification day Saturday at all schools. They encourage parents, kids and people from the community to come out and help with yard work from 7 a.m. to 10 a.m.