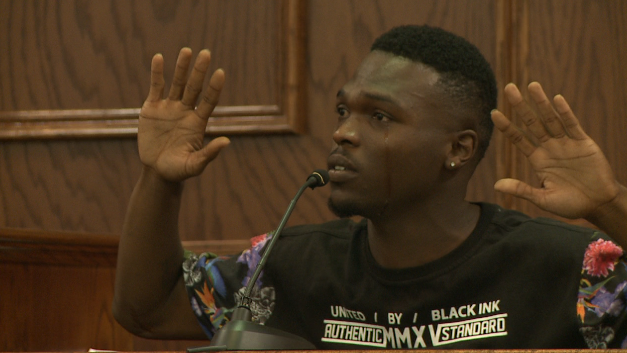 DOWNTOWN JACKSON — It was an emotional day in court Thursday as the man accused of shooting and killing a 26-year-old in Lincoln Courts earlier this month had his preliminary hearing. The man whom he and a juvenile allegedly held at gunpoint also testified against him. Christopher Lyles’ murder case was officially bound over to the grand jury Thursday, but the highlight of the preliminary hearing was the gripping testimony by an eyewitness. One of the alleged victims recalled every second, from the moment he was robbed at gunpoint to 26-year-old Beau Reid’s last breath. “I didn’t even hear them say, ‘where’s the dope or the money,'” witness Bob Akins said. “It was just boom, boom, boom, pow, pow, pow.” Akins recalls the intense moments when he says Lyles shot Reid. “There’s not a doubt in my mind that he’s the man that shot him,” Akins said. Leading up to the murder on July 17, Jackson police said Lyles and a 17-year-old juvenile forced their way into an apartment at 33 Carver Avenue, robbing Akins and James Fisher at gunpoint. “He said ‘get on the floor,’ and he had a big gun, an automatic,” Akins said. Akins said Lyles wanted money and marijuana, but when they turned it over Lyles wasn’t satisfied. He says Lyles and the juvenile then walked the two at gunpoint across the street to Lincoln Courts to try to rob someone else. “We got outside and there wasn’t a car in sight or a pedestrian walking,” Akins said. “No one was out, so it would have been hard to get away.” With no chance to escape, Akins said he did what he was told. But when they approached an apartment, things took a turn. “We knocked on the door and I saw the look in his eyes, like I wasn’t telling the truth,” Akins said. “He looked like he was going to kill me and leave me there on the man’s porch.” A few minutes passed, and then Akins said a man wearing only boxers came out the back door. That’s when he said Lyles opened fire on Beau Reid. “I was running, and as I looked back I saw a man fall,” Akins said. “Then we jumped in some bushes.” Eventually able to call police, Akins said investigators had him look through a lineup, identifying the man he said caused this night of terror. “I’ll never forget the last one they showed me,” Akins said. “I looked, and it was like he was looking at me all over again.” Christopher Lyles is charged with first-degree murder in the shooting death of Beau Reid as well as kidnapping, burglary and attempted robbery. A judge once again denied bond for Lyles. He currently is being held at the Madison County Jail. According to juvenile court, the 17-year-old who was also arrested in this case was ordered to have a forensic evaluation to determine if he is competent to stand trial. A date for that evaluation has not been set.