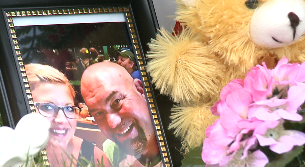 JACKSON, Tenn. — An emotional celebration of life took place Sunday afternoon for Julie and Jay Hogan, the Jackson couple killed in a two-car crash after family and friends said they were leaving the movie theater Thursday night. “The reason that we are here is because they touched so many lives,” Keri Dover said. “Just the amount of people that were here, this isn’t even a fraction of how many lives they have touched.” Julie and Jay Hogan were killed Thursday night after police say a car slammed into their vehicle on Vann Drive. “I was just crying. I didn’t know what to do. It was just upsetting,” Caden Knight said. Balloons, football jerseys, flowers and signs mark a memorial just a few feet away from where the accident occurred. “Julie and Jay had the kind of love you would see in the movies. That was not everyday — when you saw Jay, you saw Julie,” Crystal Knight said. “They never met a stranger,” Dover said. “Everybody was a family member. We didn’t handshake — we hugged.” As those grieve and carry the weight of two people in their hearts forever, it was a fitting send-off for a husband and wife who family and friends say were a gift to this world. “From the words of Jay Hogan, don’t cry, don’t be upset, celebrate my life,'” Dover said. “He was not an emotional guy. He was a tough guy. He had a heart bigger than this world.” “They are probably saying, ‘Y’all stop whining. Go have some fun, and we love you guys,'” Knight said. Funeral arrangements for Julie Hogan will start Monday with a viewing from 4 p.m. to 9 p.m. at Reed’s Chapel. There also will be a viewing from 10 a.m. until 2 p.m. at Sand Ridge Baptist Church where the service will begin at 2 p.m. Funeral arrangements for Jay Hogan will be held on Thursday when visitation will begin at noon and services will begin at 3 p.m. at Arrington Funeral Directors. The family asks in lieu of flowers donations be made to trust funds for the four children the Hogans leave behind.