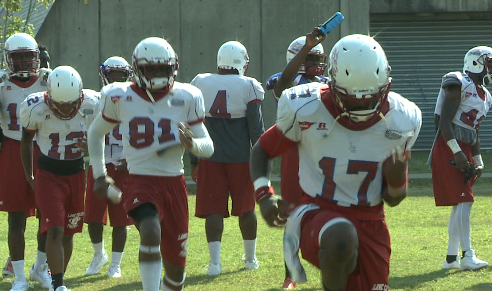 EAST JACKSON, Tenn. – A new football season at Lane College brings excitement and optimism. The Dragons are confident they won’t have consecutive one-win seasons. “You get a chance to hit somebody in a different color jersey,” senior Gabriel Mass said. “We going to turn it up.” Lane is hopeful with head coach Derrick Burroughs back on the sidelines. Burroughs spent last season at Jackson State University as their defensive coordinator. “I want us to play hard. That’s what I tell our kids,” Burroughs said. “You go out and play hard. You don’t have to watch the scoreboard.” 2014 wasn’t a memorable season on the gridiron. Under head coach, now offensive coordinator Malik Hoskins, Lane finished 1-8. “Let everybody know, we not the same team as last year, ” Mass said. “We a hard nose football team.” Coach Burroughs likes his offense heading into Saturday’s season opener against Concordia College-Selma. It’s the defense that Burroughs says is behind schedule. “We’re not where I thought we would be right now, Burroughs said. Burroughs believes his defense will step up, and hopes embattled former Vanderbilt defensive back Brandon Banks can eventually provide a spark. He’s not set to travel with the team for the season opener in Alabama. “We still got some logistics that we need to straighten out,” Burroughs said about Banks. “Still got some academic things. We want to make sure all our i’s are dotted and t’s are crossed.” Coach Burroughs added Banks is still not on the Dragons’ roster, but is looking forward to seeing him on the field. However, he couldn’t say when that will be.