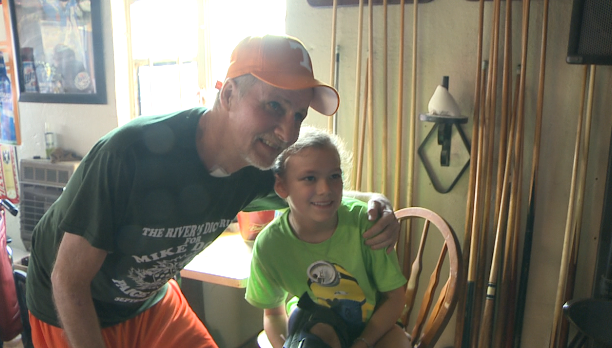 TRENTON, Tenn. — Almost two months after an accused hit-and-run driver left a man and young girl to die on the side of the road, the two were reunited Saturday with the community that’s been with them through every step of their recovery. “This is one of the reasons why we live in Gibson County,” organizer Glynn Doss said. “When something like this happens, people pull together.” For the first time since the devastating hit-and-run rocked the county, Paige Helton and Mike Doss are reunited. “We took a chance that Mike was going to come home from the hospital for this benefit, and he did,” organizer Scott Baldwin said. “God made it perfect timing that all of us are here and together.” Both were seriously injured during the July wreck, with Paige suffering bruises and broken bones and Mike a severe head injury. “I spent a lot of time in the hospital and a lot of time sedated where I didn’t know what was going on,” Mike Doss said. “I never remember the wreck.” It was along Highway 79 near Humboldt that Paige and Mike were hit on their motorcycle and left to die on the side of the road. Two months later they’re back at home recovering, but there’s still a long road ahead. “We took a long ride before the accident ever happened, and she was having a blast,” Doss said. “But when it did happen all I was worried about saving her life and taking mine because I wanted her to live, as young as she was.” And it was that act of selflessness that has many calling Mike a local hero. “I thought about her laying there and I thought about them being sent to the hospital,” Margaret Doss said. “It’s just been a blessing that they’ve come as far as they have now.” But for Mike, he said along with his special bond with Paige this entire experience has given him a family like no other. “I talk to them and tears come out my eyes for happiness,” Doss said. “I’m getting to talk to a lot of them today that I haven’t met before, and it’s amazing.” Saturday’s bike run marked the second benefit ride for Mike and Paige. The first raised more than $5,000 to help them with medical expenses. Dwayne Brasfield, the man accused of hitting Mike and Paige back on July 5 and then taking off, was released on bond last week. He’s facing a string of charges including reckless aggravated assault and leaving the scene of an accident. He’s scheduled to appear in court Oct. 28.