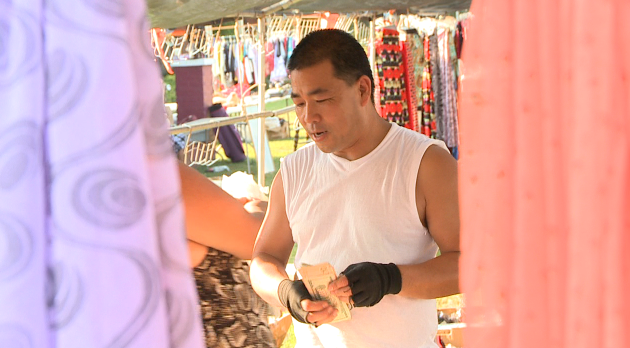 BENTON COUNTY, Tenn. — For the past 17 years, Labor Day weekend yard sale shoppers hit the Benton County Bargain Highway, but this year one vendor had more than $1,000 worth of merchandise stolen in the middle of the night, according to Camden police. Michael He is from Dixon and has operated a booth for eight years on the Bargain Highway, a 30-mile yard sale held every Labor Day weekend from Big Sandy to Holladay. He said the yard sale is one of the highlights of his year. “I have a lot of good friends in Camden, Tennessee, and every time I see new and old friends, you know, it feels like family. It’s like a family around me,” He said. Friday night, Camden police said they were called to his booth across from Camden Elementary School after six juveniles stole a number of items. “They stole a bunch of stuff, over a thousand dollars in merchandise,” He said. The stolen items mainly were phone cases and accessories. He said the suspects rummaged through a lot of his boxes and stole almost everything off the table from his booth. Patty King has been a vendor for seven years on the Bargain Highway and said she was shocked to hear of what had happened. “That’s the first time that I think I’ve heard anything about that over the years,” King said. “We’ve never had any problem.” Addie Moore has had a yard sale over the holiday weekend for 17 years, ever since the Bargain Highway began. She said most of the vendors operate on an honor system, covering their tables and tents over night. “A lot of them does, they cover it up with tarps and stuff but they just leave it out,” Moore said. She was saddened to hear a fellow bargainer had been stolen from the night before. “Somebody’s got some treasures and then somebody come in and take them from them — that’s bad.” All three of these dedicated bargainers said they aren’t worried about any future thefts and are looking forward to next year. The yard sale will last until Monday. Investigators with the Camden Police Department said one of the suspects was caught Friday night after a short foot pursuit and the other five were apprehended Saturday morning. Because they are juveniles police are not releasing their names. Officers said the six have only been cited for now.