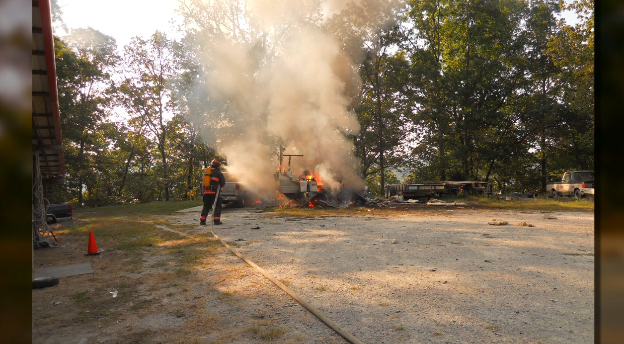 BENTON COUNTY, Tenn. — A Benton County man is fighting for his life after his home exploded Sunday when officials say a gas leak ignited in his mobile home. The leak was due to corroded copper wires in the home, and when 58-year-old Christopher Waters stepped outside to smoke a cigarette, the camper exploded, officials say. Kenneth and Linda Wilhelm live in the home across the street from Waters. “It was engulfed in flames, and at that point I still thought he was inside the trailer,” Kenneth said. Officials said the force of the blast threw Waters into the yard. Kenneth said Waters made his way from the trailer and across the street to their back door, asking for help. “I gave him some water and he drank a little bit and poured the rest over his head. His skin was falling off his arms, his legs, and his hands. It was awful,” Linda said. While her husband was on the phone with 911, Linda said she was doing everything she could to help her neighbor. “It made you stop and think that anything can happen and everything can be gone in a blink of an eye,” Linda said. Waters was airlifted to Vanderbilt Medical Center. Officials say he is in critical condition.