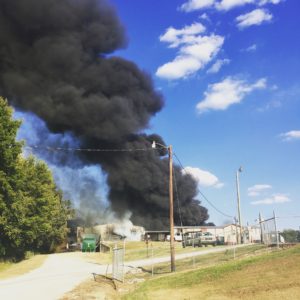 “I was driving my scooter down (Highway) 100 and saw a huge, black cloud of smoke,” witness Michael King said.

The West Tennessee Regional Recycling Hub in Chester County went up in flames Wednesday afternoon, sending that dark cloud of smoke into the air.

“They had a fire outside of the building,” Chester County Mayor Dwain Seaton said. “It started about 3 o’clock and everybody was inside and didn’t know it was burning out there, and when that plastic caught on fire, it was gone.”

He also said it took manpower from several fire departments to fight the flames.

“We’ve got at least four. We got the Finger Fire Department, which is one of the best around, we have Milledgeville, the City of Henderson and Chester County Fire Department,” Mayor Seaton said.

King said when he saw the smoke, he had to stop to make sure everyone was all right.

“I did see when I arrived that people were evacuating,” King said.

He said even after he arrived, the flames continued to spread.

Debris from the recycling plant fire could be seen on nearby cars and windshields.

Solid Waste Director Danny Benard said 18 people were inside at the time.

Family members gathered outside the plant to make sure their loved ones were OK.

“The biggest thing is nobody was hurt,” Mayor Seaton said. “All of this stuff can be replaced. There was several dollars worth of plastic recyclables up there. That’s gone. That doesn’t matter.”

Chester County Fire Chief Jim Vest said the cause of the fire is still under investigation.