MADISON COUNTY, Tenn. — Authorities have confirmed one person has been killed in a car crash in Pinson where the vehicle caught fire. 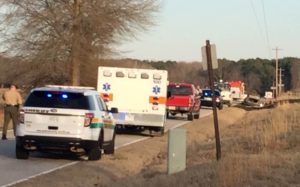 The crash occurred near the intersection of Ozier Road and Allen Road near Pinson Mounds State Park.

The car apparently hit a utility pole and caught fire.

Officials have not identified the victim.

WBBJ 7 Eyewitness News has a crew on scene. We will have more information as it becomes available.