HARDIN COUNTY, Tenn. — The man who found a skull said to be the remains of Holly Bobo took the stand Wednesday during day three of the murder trial for one of the men charged in her death. 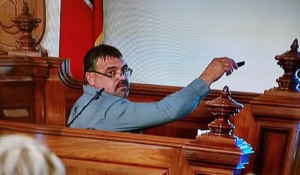 Larry Stone uses a laser pointer on a projected photo of the wooded area where he found a human skull later said to be the remains of Holly Bobo.

Larry Stone said he and his cousin were hunting ginseng plants Sept. 7, 2014, in the woods in Decatur County when he found a human skull.

Stone described the process of finding the skull, saying it was underneath a bucket in the woods.

He became emotional on stand and said he broke down when he realized the skull could be the remains of Bobo.

Tennessee Bureau of Investigation forensic scientist Laura Hodge took the stand after Stone. She described the search process that took place in the area where the skull was found. 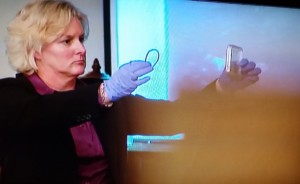 Tennessee Bureau of Investigation forensic scientist Laura Hodge shows the jury items that were recovered in the area where a skull later identified as the remains of Holly Bobo was found.

After an hourlong recess, Hodge returned to the stand and presented evidence including photos of human remains that were recovered including teeth and ribs.

Zach Adams is one of three men charged in the disappearance and death of the 20-year-old nursing student.

Stay with WBBJ 7 Eyewitness News and www.wbbjtv.com for ongoing coverage from the courtroom.