WEST TENNESSEE — For most of Saturday afternoon, West Tennessee was under severe weather watches and warnings, from sightings of possible tornadoes to flash flood warnings. 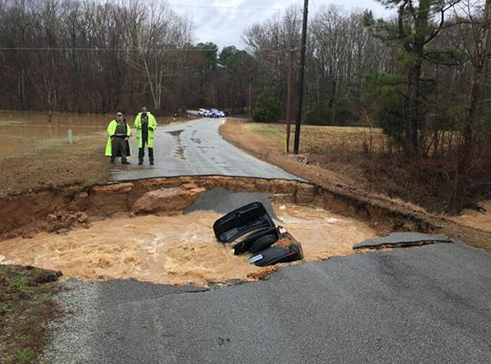 The rising waters flooded backyards and roads and left a large amount of debris in its wake.

For public safety, several roads had to be closed off throughout the day to protect drivers from getting trapped in high waters.

Otha Holt road in Gibson County is another road that has been affected by the massive flooding seen across West Tennessee on Saturday. Due to the amount of water on the road, a massive sinkhole formed.

A car actually became stuck in that sinkhole.  Investigators say a woman and two children were inside of the car, but luckily they were uninjured.

Sheriff Paul Thomas of Gibson County says they are working fix the sinkhole.

Sheriff Thomas says the highway department would either be out later Saturday night or Sunday morning to begin repairing the large sinkhole. They are currently waiting for the water to recede.